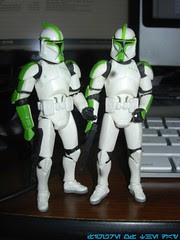 Commentary: This mold got a lot of mileage in early 2005, after the Clone Trooper was a plain white figure in late 2003 and largely absent in 2004. This edition is green, which, depending on who you ask at Hasbro or Lucasfilm, is (or isn't) the correct green as seen on screen. Gentle Giant seems to think the sergeant is actually browner, and Sideshow agrees. So to date, Hasbro hasn't done that more olivey version. Maybe with the new "Vintage" 2011 mold... or not, this could be another "Is Han's Jacket Blue Or Brown?" thing that gets played up for repaints and variations until we're all dead.

With 14 joints, this figure is largely one of the best molds from its era, and was still an exciting figure up until just recently. Heck, in some respects, it's still exciting-- the arms have a much larger range of movement than the 2011 sculpt, but it's also a little bit chunkier. So if you like your clones on the chubby side, this is the one for you. The added green "damage" is unique to this release, and dresses up an otherwise plain figure quite nicely.

Collector's Notes: This figure is a one-timer so far, although the clean green version has been repackaged a few times. Of the four packs, the battle damaged color set from which this very figure hails was always the first to sell through.