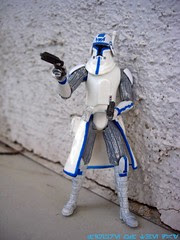 Bio: Captain Rex battles Talz warriors on the icy planet Orto Plutonia. The clone captain is ordered to protect Pantoran diplomats from the native Talz, who demand to be left in peace. Rex fights his aggressive opponents with steely determination. (Taken from the figure's packaging.)

Commentary: As a line matures, toy companies have to find a way to refresh core characters to help boost sales. In The Clone Wars there were a few built-in outfit changes, and in early 2010 Hasbro decided to go crazy with snow gear from Orto Plutonia. This nifty armor takes cues from original 1970s pre-Empire Strikes Back Snowtrooper armor concepts with some unique markings on the helmet, while maintaining elements of Rex like his twin blaster pistols and blue helmet markings. As a statue, or something to look at, it's fantastic-- but as a toy? Mixed bag.

The "removable helmet" is just a dome that pops off, which is annoying as it pegs into the head and doesn't really add any fun functionality. It just looks wonky, and probably should have been glued down. The plastic skirt piece hinders mobility, so he won't be sitting down easily. Articulation is reduced compared to the normal 2008 Captain Rex, as he has no ankle joints and his wrists only swivel and do not bend. Still, I'd say you should get it-- it's a cool clone figure that looks good. It just isn't going to be a great figure for your vehicles.

Collector's Notes: This one got repackaged a few times, so you should be able to get one cheaply. Ten bucks is too much. The base body was used for additional clones, like a Flamethrower Trooper and a regular Snow Clone packaged with a Freeco bike.