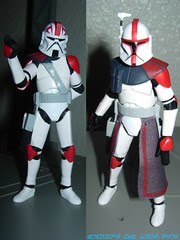 Commentary: Hasbro obviously loves me. Maybe not personally, but they made this ARC Trooper Commander figure and have made me very happy. I appreciate Hasbro including so many spare parts that you can essentially transform Fordo from his season 1/2 Clone Wars appearance to the 2005 Season 3 Phase II armor with a very distinctive helmet. Hasbro pretty much gave you everything you could possibly want for under $10, with loads of articulation and great deco. (But of course, I've got something to say about the deco. It's me, after all.)

The ARC Trooper Commander's body is based on the early 2011 Clone Trooper. The vintage figure body is basically the same as the clone from a few months ago, save for paint, a new head under the helmet, and the belt has been removed so you can use one of the two included belts to decorate the figure. The head has a new face with a fauxhawk which I believe Hasbro designers said they included because they thought it looked neat (good call), and the armor is normal Phase I/Attack of the Clones stuff. The belt sculpt is clearly decorated and sculpted to look like the aforementioned animated series, and the helmets are essentially "live action" versions of the cartoony, stylized helmets. The Phase II helmet is more like the cartoon, while the Phase I helmet with its white-capped rangefinder looks exactly like you would want this figure to look. Oh, and the cloth skirt is removable easily, so you aren't forced to use it if you don't want to.

Deco is a nifty thing because... well, it sort of says what Hasbro was gunning to do here. The figure is packaged in (and the photo on the box is of) a Phase I configuration, but the paint job is clearly, clearly meant to be that Phase II look. The normal red ARC Trooper is essentially a ranking Clone figure with added bits stapled on, while the unique Phase II Fordo has red kneecaps and elbow decoration on his armor, plus red shoulders, and none of the red arm striping seen on the original incarnation of Fordo. So if you buy this figure and display him loose, the proper configuration was clearly meant to be the Phase II look, but the Phase I parts were included if that's what floats your boat. (I plan on using them to trick out a spare red Captain repaint of the 2011 vintage figure, if one ever gets produced.)

What else... the guns are inspired by the cartoon (chunky, squareish) and the range of motion is just as good as the regular white Clone on which he is based. (Which is to say, awesome except the shoulders.) For those of you unfamiliar with Fordo he is the coolest of the clones. Watch, download, rent, and/or steal the original Cartoon Network 2D animated series to see him in action. You will not be sorry. Buy 2 if you get the chance.

Collector's Notes: A new release (and hot stuff), the figure is shipping in at least two assortments in 2011. Hopefully more. The cardback says this figure is based on the ARC Trooper of 2003 but was "inspired by Captain Fordo." For reasons I've never quite been able to get out of Hasbro-- especially considering the name "Fordo" appears on the box-- this is one of two ARC Trooper figures in the past year clearly meant to be an update of ARC Trooper Fordo from the 2002-2005 Clone Wars television series.

I regret passing on this when I spotted it in Target a few weeks ago. I did so, however, because the proportions and the texture of the figure seem cartoony to me.