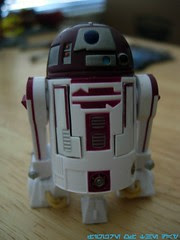 Bio: R4-P17 is Obi-Wan Kenobi's astromech droid. The faithful little droid provides navigational and technical assistance on board the Jedi's starfighter. Rebuilt by Anakin Skywalker, Arfour's original dome was replaced with an R2-series dome. The droid accompanies Obi-Wan on many missions during the Clone Wars. (Taken from the figure's packaging.)

Commentary: The R2-D2 2008 mold provides the basis for all animated-style astromech droids to date, but the arms were retooled slightly. R4-P17 shares the sculpt with R3-S6 (Goldie), R7-A7, R8-B7, and whatever else comes out next, effectively being the same as Artoo except the arms no longer have the ability to connect to separate rocket boosters. The figure fits well in most astromech droid sockets, and as Obi-Wan's droid is a required purchase if you have Obi-Wan Kenobi's Jedi Starfighter vehicle. (It came out over a year before the figure.) He's cute, he's fun, and he has lots of action features-- the side panels on his body open up to reveal claw arms, and there's a panel on his back with a string and a hook on the end of it. Oh, and he's got rolling wheels. I like this one a lot, and I hope Hasbro keeps repainting it.