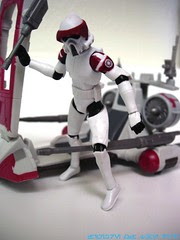 Bio: Advanced Recon Force (ARF) troopers use Republic scout speeders on reconnaissance missions. The speeders are heavily armed with laser cannons, laser blasters and light blaster cannons. With room for two troopers, the speeders pack a lot of firepower in a compact vehicle. (Taken from the figure's packaging.)

Commentary: While the overall accuracy is debatable, the ARF Trooper mold is one of Hasbro's crowning achievements in Clone design. It uses the super-articulated body of the 2008 Clone (with its fancy wrists and ankle joints) and adds ball-jointed hips which allow the figure to sit in vehicles with little trouble. Between Waxer, Boil, and various other ARF repaints you no doubt have a few of these by now-- but this one is different, sort of.

He does suffer from some distortion from the packaging, which can be easily fixed by some boiling water. His deco isn't too complicated: Hasbro added some red to his visor and shoulders, while leaving the rest of the figure mostly white. The color matches the vehicle nicely, and the white Republic logo on his shoulders are a good bonus. A little silver on the sides of the helmets bring it to life, but it's still pretty plain. On the bright side, this is an excellent figure overall, especially if you compare it to the 4-10 points of articulation releases hoisted on the Marvel vehicle lines. I would not necessarily advise you buy this figure on its own merits, but if you don't have any animated ARF Troopers, you need to get this. If you like vehicles, you need to get this. If you don't care for them, well, save your money-- the entire package is a good one, and I would definitely say you should buy it for any young fans in your life.

Collector's Notes: This wave is pretty new, and this vehicle seems to be getting the best distribution, shipping in the most revisions of the Class I vehicle assortment so far. You should be able to get one easily, and you should. For more on the vehicle, I did a write-up on the Republic Scout Speeder in July.