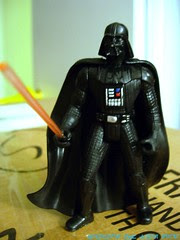 Bio: Darth Vader, Dark Lord of the Sith, has instilled terror throughout the galaxy since the beginning of the Empire. His devotion to the Emperor and mastery of the dark side gives him more power than any single individual in the galaxy except for the Emperor himself. Draped completely in black and wielding the ability to take a life with a mere gesture, Darth Vader stands as the incarnation of evil. His dislike of Prince Xizor is intense and his distrust well-founded. Though Vader would gladly eliminate Xizor, Emperor Palpatine has need of Black Sun's shipping operations to speed construction of the new Death Star. Xizor had best watch his back however, as Vader's control of the dark side of the Force makes him a most formidable foe. (Taken from the figure's packaging.)

Commentary: Oh, it warms the heart. This Darth Vader was essentially done in the 1990s Kenner house style, which involved limited articulation, an acceptable likeness, and lots of muscles-- just like Batman, or someone from ALIENS. Back then five points of articulation were still the norm for most American toy action figures, so even when you put a figure in an early comic book 2-pack like this one, Kenner wasn't particularly motivated to make it significantly better than the previously-released version of the character. The bulk of the figure is essentially the same as the 1995 single Darth Vader figure, but the cape, an arm, and a leg seem to have been updated to give the figure more of a dueling pose.

The bulk of you will not want this figure. There are other, better Darth Vaders and this one didn't even have the "skirt" part of the costume yet, that wouldn't become part of the figure line until 1998. Back in 1996, Kenner designers still made an effort for these to be playthings which could sit and not pop apart at the elbow joint, because there were no elbow joints. If you're like me and have a soft spot in your heart for the old Kenner toys of the 1980s and 1990s, along with Aliens vs. Predator and Terminator 2 and their many other movie lines, you're going to want to track these down. Star Wars was one of very few lines to survive the transition from "Kenner" to "Hasbro," and the Kenner style was bred out of the line starting in early 1999. Figures like this are pretty far removed from today's incarnations, almost as much so as they were from the original Vintage toys of the 1970s and 1980s. Were I a new collector I'd just focus on the pre-Hasbro days of the line and call it a day, but odds are you're going to skip this one. It's OK-- you had to be there for these guys.

Collector's Notes: This figure shipped on a single card, seemingly exclusive to J.C. Penny, in late 1997. The figure had a more flexible rubbery cape, and came on a green Power of the Force card. Stock of the figure was later sold to other outlets, or at least one outlet-- Entertainment Earth had the single card 4-packs, which also included an AT-ST Driver and Endor Han Solo. The Darth Vader vs. Xizor 2-pack is, today, only worth about $3-$10. It was one of the first "comic packs" back when the line only had 2 items and a full-size comic reprint was something of a novelty, as minicomics were the norm in the 1980s. I like this set a lot. I hope some of you do, too.

5 points the norm? Surely it's SIX? Neck, Waist, both shoulders & both hips.