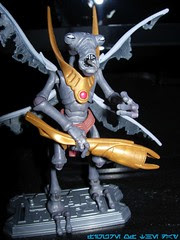 Bio: Undead Geonosian warriors lurk in a vast underground hive. They are under the control of their queen, Karina the Great, who uses a green worm to bring dead Geonosians to life. Obi-Wan, Anakin, and a squad of clone troopers battle these mindless zombies to rescue Luminara Unduli from her Geonosian captors. (Taken from the figure's packaging.)

Commentary: Once a trend-setter, now a trend-follower? In the past few years we've seen a pop-culture staple, the zombie, take over pockets of our Star Wars' expanded universe. This Undead Geonosian was Hasbro's first entry into the zombie Star Wars world, sharing elements with a normal Geonosian, showing Hasbro planning ahead to get the most out of its molds. The figure is painted greyish with decaying eyes and wings, a tongue sticking out (or is that a brain worm?), and some bright gold armor. Most Star Wars figures are weird, not freaky. The modular design has pop-off wings and armor, so you could probably make a bunch of different ones-- that is, if you found enough of them. This one wasn't particularly common. The sculpt and deco were great, but there's a problem: gravity.

The figure will not stand on his own for a long period of time. If you pop him on a display stand, he will sag and topple over with time, especially if the room is hot. So if you're going to display this one, be sure to give him extra support by leaning him up against something, or buy some tiny metal doll stands to clamp him upright. These bizarre leg joints and new CG designs aren't conducive to display.

Collector's Notes: eBay prices are cheap on this one, so if you can't find one in the wild you should be able to score one somewhat cheaply.

You get bonus points for your Alice Cooper quote!!!