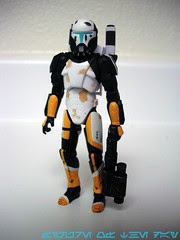 Bio: Scorch is an expert with explosive materials and serves as Delta Squad's demolitions expert. (Taken from the figure's packaging.)

Commentary: This new set marks the third release of Scorch, the Republic Commando. THIRD. That's pretty impressive, considering the game from which he originated has no known sequels planned-- it also inspired a series of popular novels, and as many of you know (and some of you don't) Star Wars fiction breeds new divisions in the fanbase. Knights of the Old Republic and Rogue Squadron fans are a unique breed, similarly, fans of the Republic Commando novels have a different perspective on the state of the franchise, its story, and the toys. And these sub-categories often are willing to spend a lot of money on their favorite characters on eBay, so it's a good thing Hasbro decided to cash in for themselves and offer fans new, super-articulated version of the quartet plus a token Geonosian Warrior.

This new version of Scorch is an interesting beast because it traded authenticity for articulation. I won't say it's better, I won't say it's worse. I will say it's different. In 2006 fans were pretty vocal about their disdain for the lack of knee joints on the figure, and at the time that sort of thing had not yet become standard issue on new figures. As movement goes, this figure is the figure fans wanted back then-- he has 14 points of articulation, and every joint save for the wrists are essentially ball joints. He can easily hold his weapon, assume more poses, and essentially be the figure many fans always wanted. While the articulation is nice, it lacks some of the elements we saw on the original release-- so I can't say I'm giddy I just dropped $40 on a boxed set which is essentially a lateral move and not a complete improvement.

Hasbro's deco on the first figure may have been more authentic to the game-- the grey is much darker now, the dirt and damage doesn't quite match some of the art. The first one wasn't perfect either, but it was a smidgen closer. The 2006 release had some added white on the back of the helmet, while the backpack remained effectively the same. His blaster is now mostly one color with painted damage, while the 2006 release had some silver highlights. The real bummer is the change to his leg-- the cannister is gone, and the sculpted strap is now merely a flat, painted line. (Similarly, Sev's ankle accessory was left out.) His deco is similar to the first release, but different enough. I cannot recommend buying this set if you have the original, particularly if you're a stickler for gear and the like. If you missed it on the first go-round, it's a nice set and priced much lower than what Delta Squad had been selling for on eBay lately. It's good, and in some respects, it's better-- so go with whatever works for your budget, either way a nitpicker will find something wrong with it. (I prefer the 2006 one overall, but the articulation in the 2011 set is nice.) I know "be happy with what you have" is antithetical to the goal of toy collecting but in this case, there's really no harm in sticking with what you already paid for.

Collector's Notes: There seems to be some confusion about this set. While some units were sold on Toys R Us' web site, and others were sold at Entertainment Earth's booth at San Diego Comic-Con, it's my understanding that more are expect in stores shortly, most likely before the end of October. These should ship along with the Force Unleashed sets in the same case-- as far as I can tell, this run was just an early preview-- when is the last time a Toys R Us exclusive anything Star Wars ended up being tough to get during its initial run? There should be plenty to go around, but the price already varies. Comic-Con had it at $50, but I ordered it via their web site for $39.99.

I think the EU Legacy wave was pretty darn tough to get at any time!

If this set does indeed get widespread retail release, I'll pick one up even though I bought the old set earlier this year. I can just use Sev's leg attachment from the previous figure.

I may get another set as well to repaint as Omega Squad, like the 2007 exclusive (even though I already have those as well).