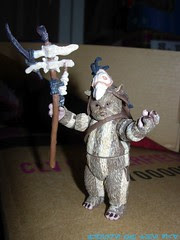 Commentary: Back in 1998, the Ewok 2-pack features Wicket and Logray, and the latter of which was more or less good enough. Wicket seemed oversized and awkward, but Logray? He more or less fit the bill. Today we've seen Ewoks greatly improved with more articulation and gear, so the 2011 incarnation of Logray really needed to be something special-- and he is! Mostly. He succeeds in sculpting, but in deco, I'm already looking forward to a tweaked repaint in a gift set.

Hasbro made a new body, complete with lateral hip movement, wrist joints, ankle joints, and for the very first time elbow joints on an Ewok. To date this is the only Ewok to sport elbows, so it seems Hasbro is trying to make sure that these shorter and more expensive figures are aspiring to be better. The head is worth noting because it can actually turn easily-- the headdress doesn't get in the way, and the joint isn't so stiff he can't look around. It's weird lavishing praise on features which should always work properly, but here we are. There are no knee joints, but that'd be ridiculous. In addition to a newly-sculpted staff, he also includes a spear for fighting. Two weapons! Nice touch. The pouch is nice, and the figure sculpt looks less mean than the 1983 original but a little less adorable than the 1998 release. They did a nice job making sure the fur looked good, and the paws are great too-- even the paint on the paw pads is nicely done. I'm sure this figure cost slightly less than other figures in the pack, but Hasbro was good about ensuring a few extra pennies were spent on the paint here and there to make up for his shortness.

Unfortunately, while the design was good and the paint quality is excellent, the stripe alignment is a problem. The waist joint establishes a visible seam where above the waist, we see stripes which don't quite align with the bottom half-- the light ones are thicker on top than they are on the bottom. I hope it varies by figure, because I'm not happy with the alignment on my sample. Thankfully the deco on the weapons (can you believe we're getting multiple paint apps on a weapon for an Ewok?) and headdress are good, as is the detail on Logray's pouch. It's obvious Hasbro was trying hard to make the bitter pill of $9 for a single Ewok easier to swallow, but the overall quality of this item as opposed to the Paploo & Nho'Apakk set is something of a coin toss. The 2-pack provides you with a lot of bang for your buck, but Logray has more work put into it-- and if Logray's stripes were aligned better, I would say I might prefer the overall quality of the product at this increasingly higher price point. But they weren't. So I don't.

Collector's Notes: This wave is pretty new, and Logray seems to be shipping in a few waves. If you see it, it might be worth getting, as long as paying $9 for an Ewok doesn't make you wretch. I've only seen him in the wild two or three times so far. (As of RIGHT NOW it's in stock at our sponsor below... but you're in the future, so go check. Did you know the only money I get from these sites is a cut of the sales through those sponsor links? It's true! It doesn't cost anything extra when you order, so IF you order there anyway, please click through the below sponsor link.)