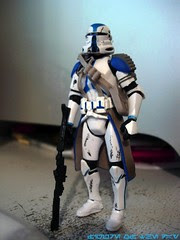 Bio: After he becomes a Dark Lord of the Sith and the Emperor's new apprentice, Anakin storms the Jedi Temple with his personal legion of clone troopers, including an elite division of airborne troopers. Together, they eliminate all the Jedi inside, sparing no one. (Taken from the figure's packaging.)

Commentary: You can put pretty much any figure in the 501st deco, even the Airborne Trooper, and it's going to look neat. This clone trooper never quite appeared on-screen, but it looks like it'll fit in with your legions of 501st-themed figures. Based on a modified Evolution Clone Trooper mold, the figure has good articulation and excellent deco. The 501st markings are present in their usual blue color, with lots of black scuffs and scrapes that, if you don't think about them too hard, look pretty great. Some white paint on this belt looks pretty awful, but if you can get beyond that it isn't all bad. 14 points of articulation await you, and due to the figure's kama he won't be able to do much sitting. His helmet fits-- thank the lack of a pauldron to get in the way-- and a spare hand blaster is tucked away in a satchel which hangs under his arm. It's a well-armored figure with a unique helmet design, so why not get one?

Collector's Notes: The set-- like most Order 66 sets-- aren't very expensive these days. Expect them at or under original retail, which was good for when they came out. (Two figures for ten bucks in 2007 or 2008 was still quite a deal.) This configuration of the mold (Airborne Trooper) also exists in purple for Mace Windu, orange for Obi-Wan Kenobi, and as a Battlefront II-inspired Sharpshooter.