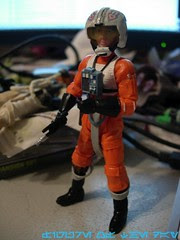 Commentary: In the Evolutions Rebel Pilot packs, only the girls got holsters. The first female Rebel pilot to see release was Dorovio Bold, a plucky young lady with black hair and a gnarly helmet with little hearts on it and outlines that remind me loosely of 1980s arcade cabinet graphics. (That's a good thing.) The body is smaller than the boys, and her blaster fits right in her holster. Hasbro's decision to include the grey straps around the boots and between the legs hinders her ability to sit, so as a pilot toy she's not exactly a real winner. (The "one size fits all" approach for kids and collectors doesn't always work for action figures.) The lack of complaining from the collector community shows just how few people are opening or playing with these, or maybe it's just me. I'd scream bloody murder if my AT-ST Driver wouldn't fit in my AT-ST. Anyway.

Dorovio has 14 points of articulation and is, unquestionably, a super-articulated action figure. I think most collectors are probably glad Hasbro waited to create the female pilot body, because now any female pilot Hasbro makes will be, at worst, super-articulated. As an unknown deleted movie character who was unnamed for years after the movie wrapped production, she's the very definition of obscure. Of course, maybe she's in the movie and we just haven't found her yet-- we'll know for sure after those Blu-Ray discs hit in September I assume.

Collector's Notes: In 2008 Evolutions packs transitioned from slightly scarce and desirable items to pegwarmers, largely thanks to lots of similar product and repacks all hitting at once. (A second Rebel Pilots pack hit around the same time as the first, using the same bodies.) Today this set can be had for $15 or less, and it's totally worth it at that price.