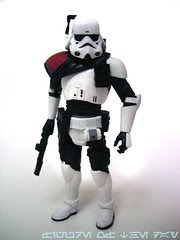 Bio: The navy commando officer leads a squad that consists of several troopers, a sergeant and a medic. (Taken from the figure's packaging.)

Commentary: The Imperial Navy Commando Officer, like the bulk of the figures from this set, are from the Wii, PSP, and PS2 ports of The Force Unleashed. So rather than just splitting confused fans into "played the game" and "did not play the game" groups, now Hasbro is going down the platform line. I've played through the original game twice, and was wondering if I just forgot these guys. It turns out I didn't, which means I'm glad I have my wits about me but it also means I just bought a 5-pack of figures where the only character from the game I actually played is a repaint of something I already have several of. What the heck is wrong with me?

As another of the Empire's troopers, the designs seem to mix together new and old elements to give you something vaguely new. The helmet is a little like Bacara's, the pauldron is unquestionably Sandtrooper-esque, and the rangefinder is a nod to the Fetts. Of course, in terms of the chronology of the story, the design is most likely a "futuristic" take on the ARC Trooper design. There are more elements on the armor, like a swell backpack that plugs in to a "n" shape on his armor, plus a nifty holster molded right into the side of the leg so it actually works well and doesn't hinder the movement of the figure. This is a job well done, and he has 14 points of articulation as well. There's a lot to like here. An added grenade on the front of his armor is a nice touch, and the armor seems to be a pretty good plastic translation of the in-game polygonal model.

The standard version of the commando also comes in this set, so troop building is a little tough. The officer is almost identical to the normal guy, with a few notable changes. One, the deco on the back of the figure is different as the area in which the backpack plugs is unpainted on the officer. Two, the helmet has been resculpted to have a rangefinder. Three, the pauldron. And... that's it, really.

Collector's Notes: As a new set I've only just seen for the first time less than a week ago, I don't know how tough it will ultimately be to get one of these. Someone tried to hide this behind some Evolutions packs at my store, and it was the last one. I found it, I bought it. People who hide things are getting lazy, so do yourselves a favor and please stop trying. Nobody benefits when you hide stuff, particularly when you forget to go back and buy it. Now if you'll excuse me, a rerun of That 70's Show is about to start.

That they're not in the 360 version explains why I was wondering who all the characters were in that set. Yeesh.