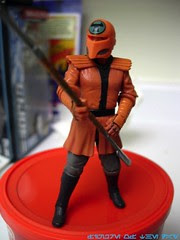 Commentary: The correct reaction to being presented with this figure should be "who's that?" Alum Frost was a minor character in the Crimson Empire comic series, one of the training buddies of the main characters who got killed pretty much upon meeting him. The orangey-red figure does match his comic persona nicely, down to the green symbol on his helmet and back, but did you need him in your collection? Not really. Some figures come out not because they're demanded, but because they're easy-- Hasbro managed to recycle a lot of tooling in this set while only creating 2 new heads, a new torso, new arms, and a new weapon to crank out four new figures. The legs are recycled from a training gear Clone Trooper, which is funny, because that Clone Trooper was poo-pooed for its leg movement. Under the helmet is a bald head which, I assume, is modeled after someone in Hasbro or Lucasfilm, but I have no idea who. The plastic quality of the head is acceptable, if a little pale, and the paint job in the face could be better. If you like the idea of getting Royal Guards in training he's pretty neat, but not particularly Star Wars-y.

Collector's Notes: The set performed poorly. How poorly? It was closed out at Walgreen's and other strange places for less than half sticker price. This wasn't an items fans wanted, or if it was, it came about five years too late. The set is essentially 2 figures collectors already owned plus one guy repainted four times. It was frequently derided as a batch of "Power Rangers" which I thought was harsh-- Power Rangers are a little more colorful and came with better vehicles and mech toys.