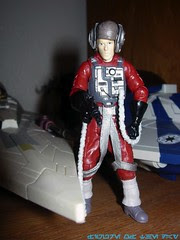 Commentary: It's not very surprising why Palso Thern has a generic bio on his package, as these sets are of increasingly obscure pilots to the point where I doubt most collectors would know if the character had a name before the release of this action figure. (He didn't.) So Hasbro's picking characters out of stills from the movie, Lucasfilm is making up names, and you're buying-- which I guess is a good thing but it's not like we need more B-Wing pilots, really. This figure reuses the 2008 B-Wing Pilot body, which we've also seen on Ten Numb, Nien Nunb, and Keyan Farlander. Speaking of Mr. Farlander, Palso Thern is very close to him in appearance. Thern's straps are silver (as opposed to unpainted cream plastic), his lower pant legs and boots are recolored, and there are tiny details changed on his chest panel. But other than that? I'd say you were hard-pressed to say the figure is significantly different. Thern's helmet fits awkwardly, he's blonde, and to make matters worse he's very pale which means his head basically has lost all detail. A little melanin goes a long way, even fake plastic melanin is good to have. (Ask Barbie.)

He can be stuffed into a B-Wing if you're so inclined, but Keyan Farlander (soon to be single-carded) is probably a better purchase unless you want the entire set of figures, and you probably do. However, if you get this one, it's not like the figure you cram in a vehicle cockpit has to be great-- just good enough, and Palso Thern is certainly good enough. The new head sculpt is a nice touch but there's nothing here that would qualify as exciting.

Collector's Notes: Since debuting in early 2011, the set remains available-- and depending on which Toys R Us you shopped at, this exclusive action figure set may have gone up as high as $7 above its issue price. The set also includes Major Mianda, R2-T7, and the slightly better-known Grizz Frix. He also fits nicely in the new Vintage B-Wing at Kmart, but there's a reissue of Keyan Farlander coming if you just want an individual pilot.