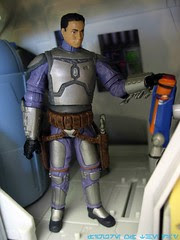 Commentary: Since 2008 Hasbro has been playing around with its Evolutions Jango Fett mold with this being the latest and greatest incarnation of the figure. As pricing goes, it's not exactly an improvement, but those seeking the (arguable) best will be well-served with this Kamino-specific version of the Fett father. The deco is closer to what fans asked for over the past few years, with a less-purple bodysuit and very dark blue gloves. The body sculpt is essentially the same, except some spiky climbing gear has been added to the gauntlets. The head deco is better than previous incarnations, with the scarring and stern expression seemingly more realistic and less painted-on than previous releases. The range of motion incorporates the same 14 joints, and the arm movement remains stiff courtesy of the wiring hooking the gauntlets up to the rest of the arms.

My favorite new addition to the figure is the jetpack accessory, mostly because it shows a really pleasant level of creativity that we don't see as much in the hobby. Rather than having a boring peg reach down to secure the rocket in place, Hasbro's clever sculptors added a "flame" to the bottom of the rocket, so when you remove it, it looks like it's shooting out. This kind of thinking really deserves to be rewarded, because it's such a great idea it's a wonder Hasbro didn't do it 10 years ago. Don't miss this one, unless you have a rule against upgrading your figures. It's close enough to earlier releases where you may not care-- and I personally believe Hasbro will attempt at least one more all-new (and probably Geonosian Arena-based) Jango mold between now and when the line ends-- but as far as today goes, and as the accessories go, this is basically as good as it gets.

Collector's Notes: Since Hasbro redecorated Evolutions Boba Fett as a single figure and now Jango, the only real reason to get the Fett Evolutions pack is the Mandalore figure... which is, unquestionably, worth it. This figure pops up from time to time but most Vintage core characters tend to sell well, so he tends to be harder to get than others.