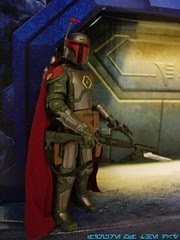 Bio: Mandalorian leader Jaster Mereel and his second-in-command Montross play pivotal roles in the dark past of Jango Fett. Mereel and Montross change the life of the future bounty hunter during the Mandalorian Civil War in the decades before the Clone Wars. (Taken from the figure's packaging.)

Commentary: One of the most fascinating things about Boba Fett and the entire concept of the Mandalorians is if you don't like one origin story, you'll probably get another one to pick from down the road. Originally coined as an alias in the early career of Boba Fett, a comic book series established Jaster Mereel as a Mandalorian warrior who fought alongside Jango Fett and Montross, which doesn't quite fit with the current incarnation of the planet Mandalore as seen in The Clone Wars TV show. Rather than to try to make sense of it, as Lucasfilm seems intent on doing, I'd suggest you just enjoy them for their unusual differences and embrace the non-continuity which exists.

Jaster is a retooled 2008 Jango Fett, a body which has been used for Starkiller, Fenn Shysa, and probably more as Hasbro sees fit. It's a decent body, and really a good choice for an exclusive or collector-targeted figure. The mobility in the joints are good, but not great, so odds are this figure's life will be spent either carded or on a display shelf. He has 14 points of articulation, has a new head sculpt, and his weapons and holsters are also new. The pistols fit in his holsters just fine, while the rifle has a unique Mandalorian marking-- a Mythosaur skull or a Bantha skull or whatever the Hell they say it is this week-- sculpted on the weapon. His deco matches the Jango Fett: Open Seasons comic art nicely, and under the helmet is a newly-sculpted head which I've heard more than a few fans describe as John Kerry with a broken nose. The hair is a little messy and chunky, and the character in his face is a little more gritty than the 2007 Elite Forces of the Republic Mandalorians. I like this one-- I realize I don't need it but the cloth cape and weapons do make for a nice figure. Given the size of the line you can probably skip it, but I'm a big fan of recolored Mandalorian figures. The only thing stopping me from buying more is a lack of new ones to get.

Collector's Notes: This set shipped last year as an online Entertainment Earth exclusive and is still available. It, and the other sets in the wave, were originally planned for a retail release but were instead produced in a limited quantity as an online exclusive. As always: this site is supported by that one ad banner, so if you feel like buying this figure (or anything from our sponsor) please click the "BUY THIS FIGURE" link below and order anything you were going to buy anyway. We get a cut, it costs you nothing, and helps us out a whole lot. Thank you for your support!