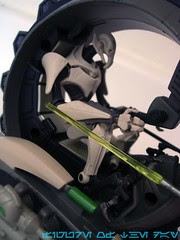 Bio: Your GENERAL GRIEVOUS figure will be unstoppable and fast-moving on this incredible ATTACK CYCLE vehicle! Place him on the seat, lightsaber in hand. The lightsaber and included electrostaff attach to the fast-rolling vehicle! Whether your GENERAL GRIEVOUS figure and ATTACK CYCLE vehicle are in the thick of battle or standing at attention in your collection, the fate of the galaxy rests with you! (Taken from the figure's product info page on Hasbro.com.)

Commentary: If you recall-- who am I kidding, of course you don't-- I didn't like the last new General Grievous figure Hasbro put out in 2010. Surprisingly, Hasbro seemed to take the 2010 design and make a ton of great fixes to the design, resulting in a much better figure. While not perfect (standing is difficult due to its unique design) it turned out much, much better-- the plastic is stiffer, the joints are sturdier, and it doesn't feel as rubbery as the original. You still need to be careful with it, but at least it gravity and a warm day won't cause him to fall... although gravity likely will get the best of him quickly. The shoulder armor was removable on the initial release in 2010, this new release has them fused to his arms-- a huge improvement, one fewer thing to have kids lose in the back yard. I know many of you don't care but to me, it's extremely important that these retain their functionality as toys. As a collector, I can understand why a figure has a battle-slash action or why a figure might not have knee joints. I hate to think there are kids buying figures whose hands pop right out and get lost because our insatiable demand for moving parts changed the game from a plaything to a collectible for adults-- it's tough to reach the middle ground, but I think this figure did it. The fact that it has a vehicle is a nice bonus.

This new Grievous has articulation at the neck, shoulders, forearms, elbows, hips, knees, and ankles-- it's quite good, and with a little futzing fits in his bike nicely (pictured). He has clean armor more or less free of damage, yellow eyes, and is more toylike than the movie figures... heck, even the previous cartoon figures. It's a pretty good figure and while it will likely not be able to stand unassisted (read: leaning, or held in a small doll stand) on your shelf for more than a few days due to its design it's a better toy than many. I think you'll like it-- the entire package is a nifty purchase if you appreciate a good, fun toy.

Easter Egg: Shortly after this article went live, a little birdie told me about an Easter Egg in the toy. The lightsaber included is modeled after Sha'a Gi's from the original Clone Wars cartoon. So Grievous clearly added it to his collection, meaning he must have one awesome rack for his FX Lightsabers. (Thanks to a tipster for pointing this out!)

Collector's Notes: This wave is pretty new, and is not the fastest seller of the batch. It is a strong toy, though, and is worth looking into. The same basic figure with more gear was sold in the "Hunt for Grievous" 2011 Battle Pack with clones Rex and Kix-- we'll be looking at him in a few months. It's also worth noting the large double cannons on the sides of the bike are removable and fit nearly perfectly in most Transformers with a 5mm-peg hole for a fist. (See: most Armada, Energon, Classics, Cybertron, and MechTech-compatible toys.)

Today is the 16th anniversary of my writing about Star Wars toys on the internet! What did you do with your life?
Posted by Adam16bit at 5:01 PM

This vehicle is pretty sweet!