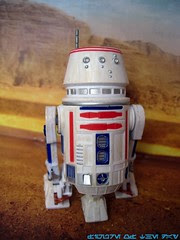 Commentary: Despite being a minor character, R5-D4 managed to carve out a big history thanks to the lack of toys available in the 1970s. The first figure in Kenner's original action figure line to recycle a body, the 1979 original is a fairly famous figure among fans and because he lucked out into the world of toys, he has a fame unmatched by other astromechs who aren't R2-D2. (See: Skippy the Jedi Droid, Servotron's song "Red Robot Refund.") Heck, even when I was a little kid, my dad knew who R5-D4 was, although I never really figured out why he knew its name. Despite being minor in the grand scheme of things, R5-D4 benefitted greatly from being out the door early at a time where lots of very creative, very impressionable people were paying close attention.

So now in 2011, we have the fourth 3 3/4-inch action figure of R5-D4, which is surprising given most fans assumed the 2006 release was really great and likely to be the last one. Guess who was wrong! This new version of the droid is a redeco of the 2009 build-a-droid mold, so you can pop off his dome or legs if you're so inclined and swap them with other build-a-droid action figures. The deco is pretty good, but a few panels are missing so fan may prefer the 2006 release as overall authenticity goes. This one is still loads of fun, but I think the man reason it exists is so Hasbro could make another one of the original figures on a new Vintage cardback. It looks gorgeous, so I'm pretty happy they made it. Not that I needed another droid, but I'm not complaining.

Collector's Notes: Wave 5 got middling distribution in early 2011, showing up in some stores (and regions) more heavily than others. You may or may not have seen a lot of this one, he shipped only in wave 5 so far. He still pops up as of today.

Only one problem with R5-D4...Hasbro continually forgets to paint the back panels red!