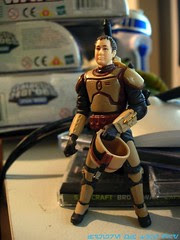 Bio: Mij is one of the Mandalorians chosen to train the clones on Kamino. He is a natural leader and a skilled warrior who can instill in the clones an unyielding commitment to protect the ideals to which they have sworn their allegiance. (Taken from the figure's packaging.)

Commentary: Remember when exclusive boxed sets got you lots of weird stuff pretty cheap? I do! I worked at Entertainment Earth when this exclusive set came out and it was pretty exciting stuff-- not just because it gave us some of the very few NEW Mandalorian figures we've had in some time, but because Mij Gilamar shares the face with a former member of the Star Wars team who was responsible for the Cloud Car not coming out for several years. (His name is Brian, in case you see him. But be nice. He's good people.) The character was invented for this boxed set, but the armor is similar to illustrations which previously appeared in the Star Wars Insider magazine.

The figure's body is based on the tried and true new head + repaint = new character plan, which numerous companies have used to great success over the years. The legs are also new, but the torso and arms are borrowed from the 2002 Kamino Jango Fett action figure. The arm articulation is pretty weak, with rotating elbows and shoulders with no wrist movement. The legs are great, with ball-jointed knees and ankles. The head is normal. This is one of those figures you buy because it looks cool, and it's a pretty decent toy. Sure, it flies in the face of the always-in-motion continuity of Star Wars and Clone Wars, but it's a really cool toy and a great relic from the pre-The Clone Wars days where you could tell the story of those battles with new action figures.

Collector's Notes: Oddly, history has been very kind to this figure with loose samples going for $20-$35. The boxed set is about $90. (Wow.) As a plaything, it's obviously not worth those prices, but as one of few non-Fett Mandalorians odds are you'll want to get all of these guys. He was sold with Isabet Reau, Dred Preist, two Clone Troopers, and a pair of black ARC Troopers. I dug the built-in army-building aspect.

What a difference half a decade makes. I'm a fan of The Clone Wars, but I don't like the direction they took the Mandolorians. This is more interesting to me.