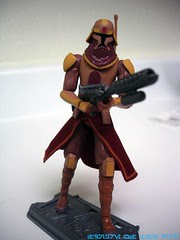 Bio: A clone trooper uses a flamethrower to fight Geonosian drones. The trooper's squad is battle their way through a cave to reach the rest of the Republic invasion force. Their mission is to wipe out a droid factory manufacturing powerful new weapons. The clone trooper aims his flamethrower at the attacking drones to clear his path. (Taken from the figure's packaging.)

Commentary: Since 2010 Hasbro has had made a good effort in getting Geonosis-specific Clone Trooper animated figures on the market. This one is a slight remold (and a total repaint) of the snow gear Captain Rex of early 2010, down to the removable helmet dome and backpack. The figure's big change is a cloth skirt allowing him to sit if you're so inclined, plus it allows more movement in the legs. The large flamethrower accessory-- which, let's be frank, cannot stand with the figure easily with the flame in it-- brings all sorts of new balance issues so you probably will need to buy some additional means of support to display this figure with the flame attached. (Fishing wire, perhaps?)

The earthy red deco looks great, with orange highlights matching the bulk of Obi-Wan Kenobi's 212th Battalion figures. If the flamethrower is too much for you, the flames can be removed (or snapped on to a droid), or you can just use a normal blaster rifle. It looks great, and is another fine example of Hasbro following the animation's lead to reuse an existing design to get more mileage out of the work which has already been done. I should also note, the shoulder armor is removable-- so be careful, or you will lose it. I feel this was something of a mistake, as it's a potential hazard for lost parts. Or choking, I guess, I'm more worried about missing pieces.

Collector's Notes: You should be able to score one of these for $10 or so, or at retail. It's a nice one, not particularly rare, but quite distinctive on a shelf.