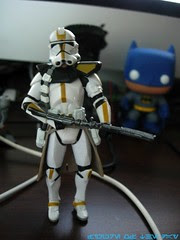 Bio: The clone troopers in the 327th Star Corps serve with Aayla Secura during the Clone Wars, under the command of Commander Bly. The troopers have taken part in battles on many worlds including New Holstice, Honoghr, Anzat, and Saleucami. (Taken from the figure's box.)

Commentary: Up until (and including) 2005, Hasbro had been pretty conservative with its trooper output. Clone Trooper figures like this one were something to be celebrated-- even though this Star Corps trooper is very similar to a 2005 release, it now lacks battle damage and dirt, thus making it new and different enough to be interesting. Slightly more yellowish compared to the barely sorta greenish tint of the 2005 Evolutions Star Corps Clone Trooper, this one may qualify under the "Just Different Enough To Make You Mad" policy. I think as a trooper collector, it's easily altered enough to be unique. The striping is barely thinner (although this may be a batch thing), with no scuffs, which makes it distinct. The sculpt is pretty great, with one big shortcoming: the helmet. A removable helmet and a removable pauldron don't play nice together, so you can see his chin peeking out from underneath the helmet, giving the enemy droids a nice soft spot to shoot. Ah well. Without the pauldron, it's a perfect fit. I like this figure (and this set, for what it aspired to be) but unless you need every version of every clone, the entire Betrayal on Felucia Battle Pack is a skippable item as other releases are similar (or better), save for the exclusive Star Corps trooper with a non-removable helmet. Which I like better. So I guess it's essential.

Collector's Notes: A very similar figure with a different gun was sold individually carded in 2008. A paint variation there makes it very distinct from this one, although one of those variants is close enough to this release where you may not know the difference. It's good for army building, for sure.