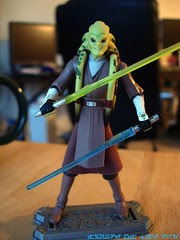 Bio: Kit Fisto endures a grueling battle in the lair of General Grievous. The Jedi and his former padawan Nahdar Vebb enter the cyborg general's lair while on the trail of an escaped prisoner. Fisto battles Grievous in a fierce duel and emerges alive from the lair, taking Vebb's lightsaber from the general befor he escapes. (Taken from the figure's packaging.)

Commentary: Since Hasbro put out an animated Kit Fisto in 2009, I was bewildered as to why we'd get another one in 2010 already. It turns out because Hasbro wanted to make a better one, which is the reason we want to hear for this kind of thing. Kit comes with a grin, enhanced articulation, and his former student's lightsaber. (That's right, Nahdarr Vebb fans!) The deco feels greatly improved, with a new head and legs (and lower robes) to give you a more poseable figure. This time around, he has knee joints, lateral hip articulation, plus ankle joints-- a nearly perfect super-articulated Jedi Master. Hasbro did a great job here, plus the animated sculpting was well-preserved so he'll be right at home with your other action figures from the TV series. This is one of my favorite Jedi from the TV line, so I'd say get it if you can.

Collector's Notes: This one has been pretty easy to get since debuting last year.