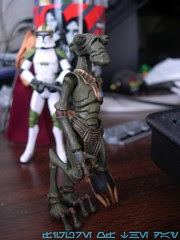 Bio: Clone troopers battle Geonosian drones to stop the production ofm ore battle droids. The special ops clone trooper is a highly skilled marksman. With his DC-15a blaster, he takes aim at the swarms of Geonosian drones that are attacking the Republic forces. (Taken from the figure's packaging.)

Commentary: I'm of two minds about this Geonosian Drone figure. It has a good sculpt with a lot of detail, and that's good. There are about 14 points of articulation, and that's what we supposedly want. The problem stems from the design itself, which does not lend itself to long-term display. The figure can stand, but it needs additional support-- if you use a small doll stand like you can find at a craft store, he'll stay upright, otherwise gravity will get the best of him as the included display stand won't help compensate for gravity's effect on his leg joints. Having said that...

This is one of Hasbro's best-looking Geonosian figures. I've got 'em all, and I really like how this one turned out. Using a new modular design which allows Hasbro to easily add or remove elements from the figure, his face has a few colors of paint on it which bring it to life nicely. His expression isn't necessarily vicious or mean, but it's certainly stern and a little menacing. With giant nostrils and a smattering of brightly-colored adornments, it matches the show nicely and just feels more lively than a lot of the other Hasbro figures. The deco just makes this mold come alive, and it's too bad that (to date) the only way you can get this figure is in an exclusive 2-pack. The companion clone is nice, but this is arguably the neater of the two figures.

Collector's Notes: The set lingered for a while-- for all I know you might still be able to find one-- but it seems this assortment is now long gone. I don't really feel the set was a spectacular deal at $15, but anything under $14 or $13 starts to get into "value" territory. It's neat enough to grab, especially if you can stumble on a lot of them for cheap.