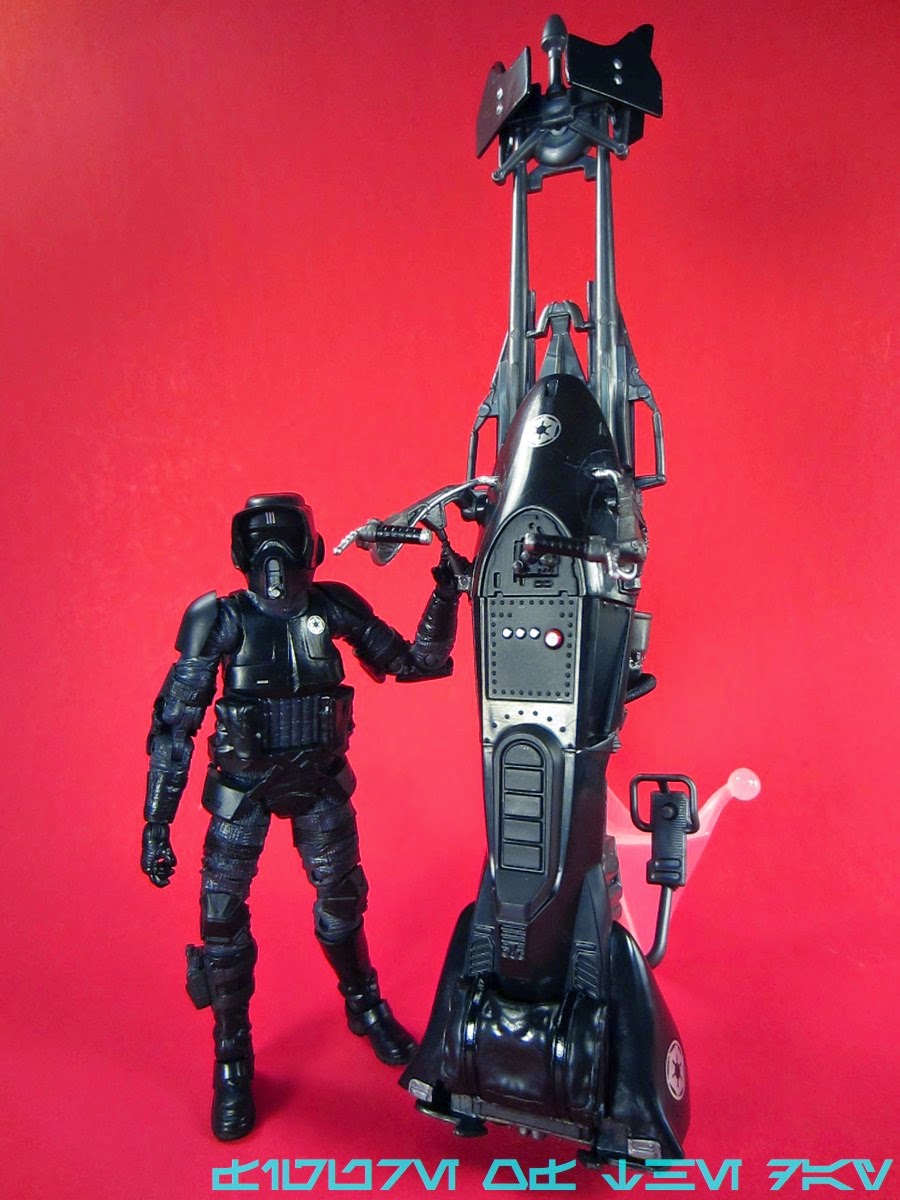 Commentary: This Shadow Scout is a quick repaint - the last time we got a black scout trooper with a bike was during the 2007 line as a Comic-Con exclusive, and this is a pretty neat update of that design. The bike deco is more striking than the regular movie version, the helmet paint is less wonky (come back for more on that Friday), and while the idea is sort of dumb, I'm also sort of dumb.  I love it. 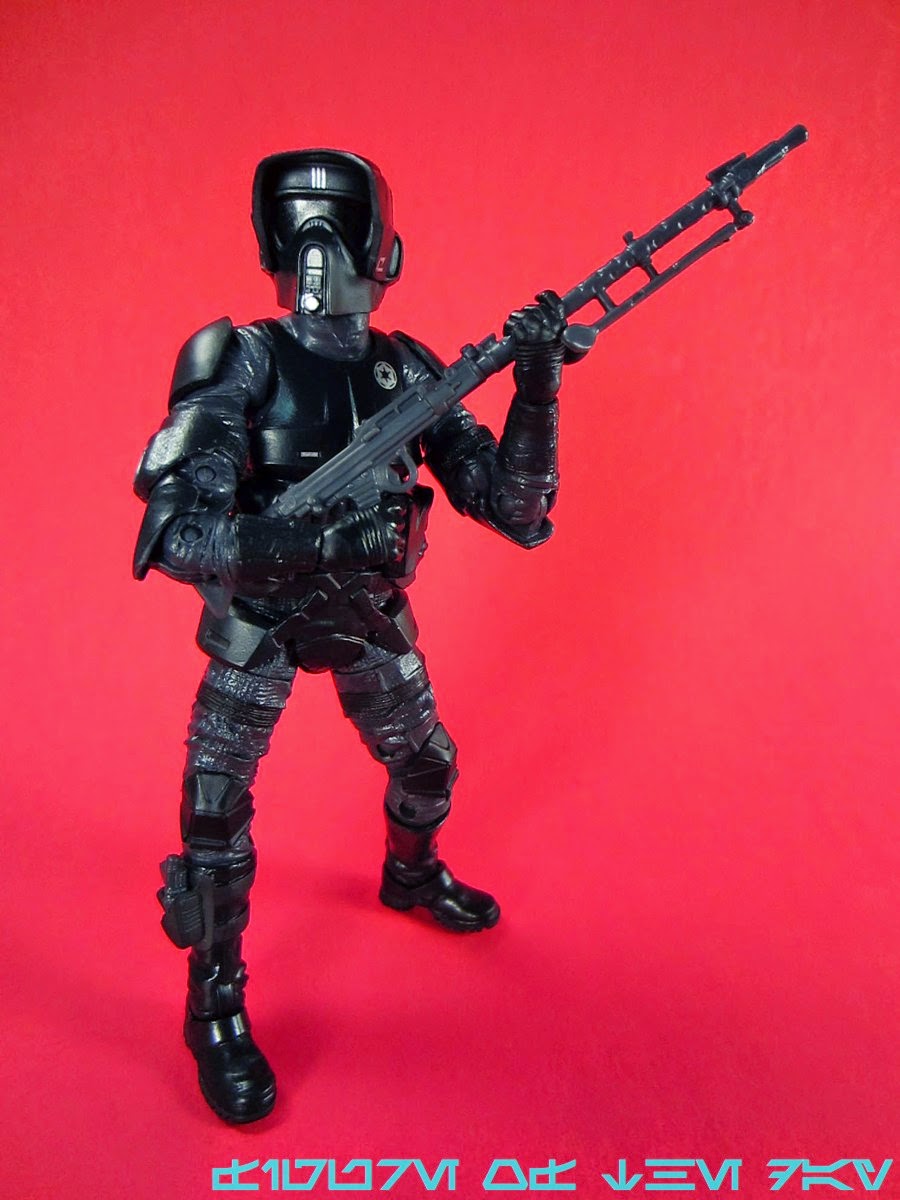 It's weird, but ultimately cleaner than the white trooper that has a brown smear between his armor chest plates and an off-center visor paint app.  This one seems nicely centered, and the black plastic figure has a very dark grey body glove. A silver stripe above his eyes makes for a nice accent, as does an Empire symbol over his heart and a little silver line on the opposite man boob. The back of the figure has some lovely grey and silver accents, plus a red marking on the backpack part.  He even has dark grey soles - Hasbro did more than they needed to in order to give us an above-average figure at a price that... well, let's say it's a fair price.  The boxed set is $10 cheaper than a bike with trooper and a sandtrooper would be individually. 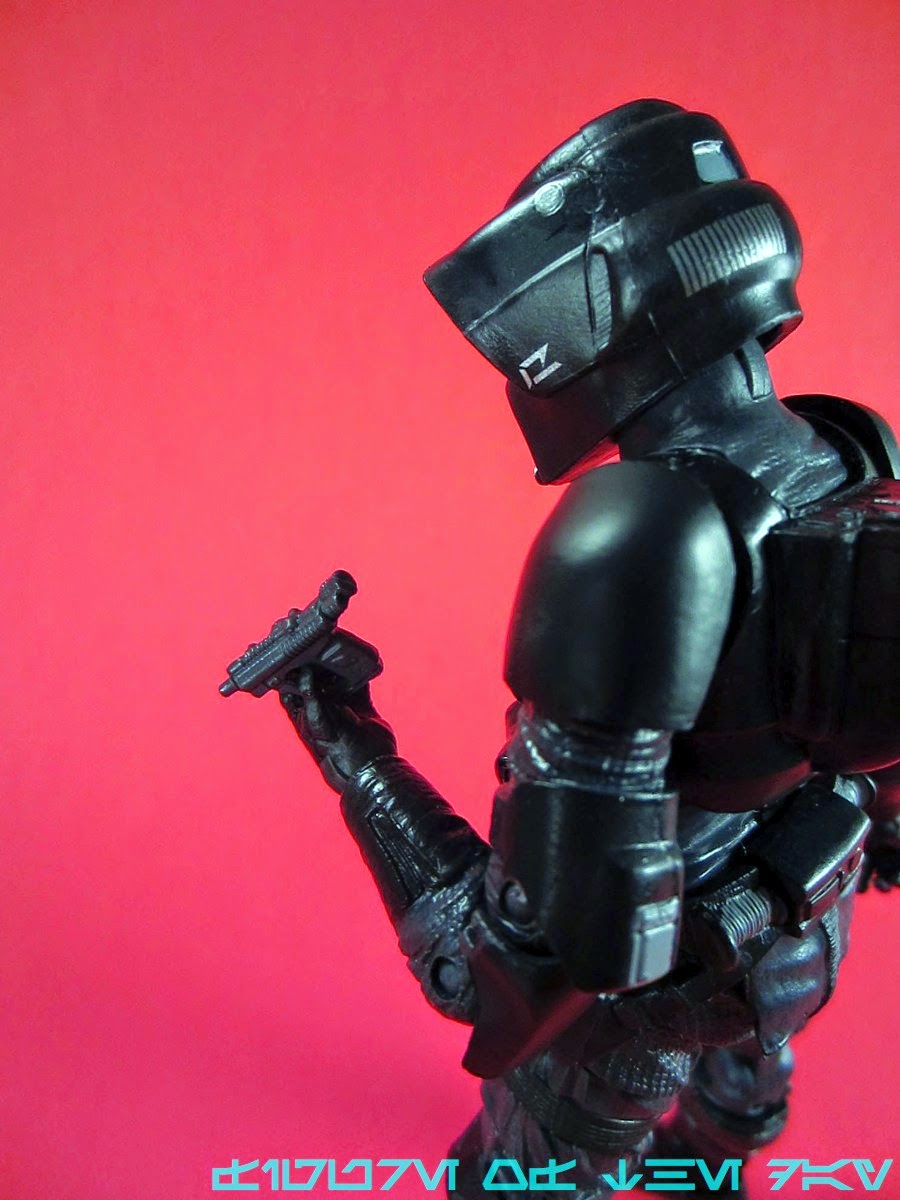 My one sticking point on this figure is the teeny tiny blaster, which isn't big enough for the figure's fingers.  Depending on which measurements you use, it's pretty close to the size for the scale - but action figure collectors will note that the 6-inch Scout Pistol is virtually the same real-life size as the 3 3/4-inch one. That ain't right.

It should be bigger and it opens the door for a third-party, larger gun.  It fits nicely in the holster on his ankle, but it basically is worthless for his hands.  I decided to hand him one of the Sandtrooper's rifles (shades of the Battlefront Scout Trooper from years ago) and I think he's much happier as a result.

The bike itself is quite nice - lots of silver highlights, rivets, bolts, and other bits and pieces.  3 Empire symbols bring it to life, and the survival gear in the back is in a black blanket. The clear plastic stand with three adjustable levels remains present, and the brake flaps in the back seem to open much more freely and easily than on the single version.  I prefer this black one in terms of overall quality, no question, even if it isn't true to the movie it seems better made. 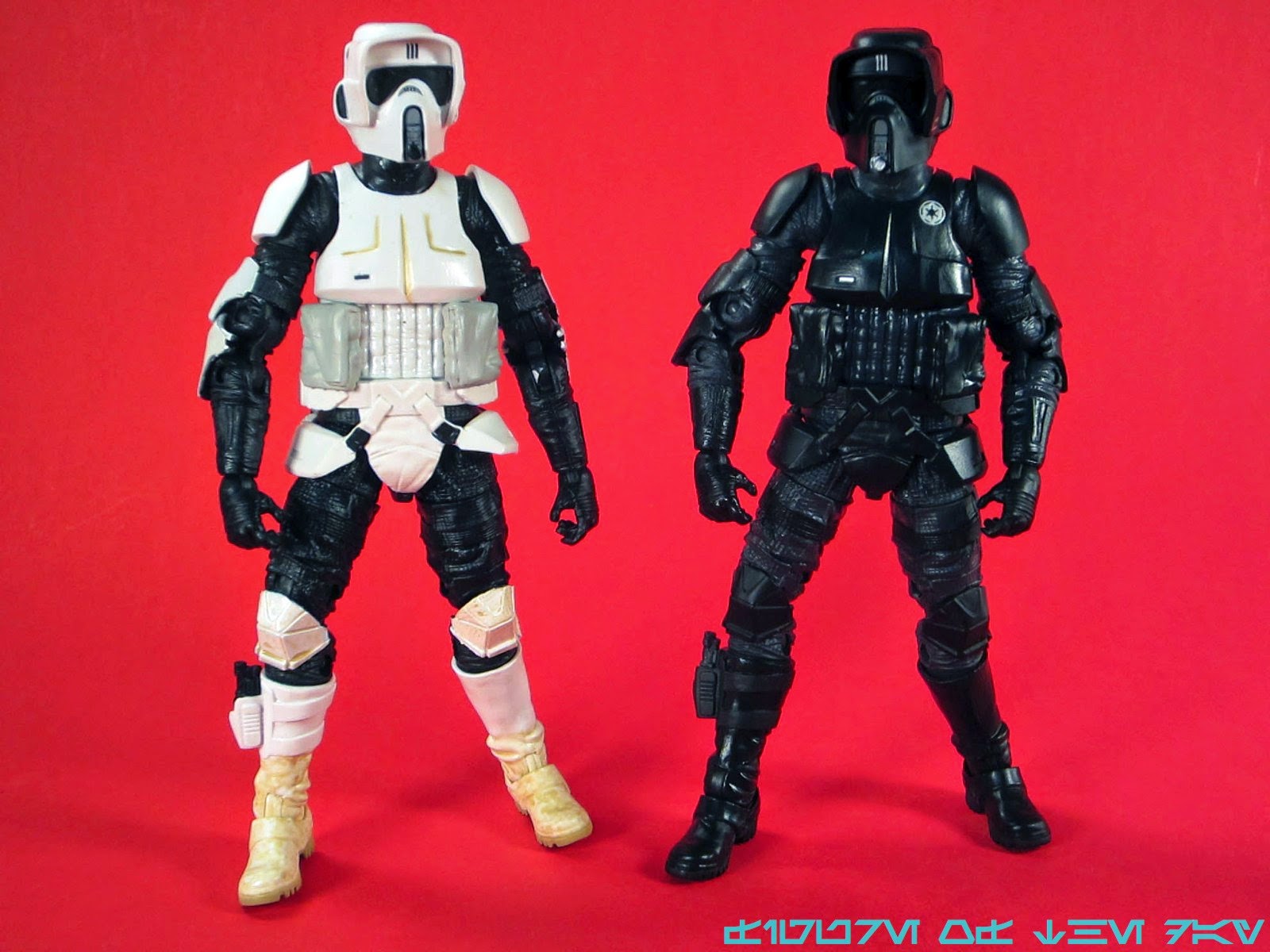 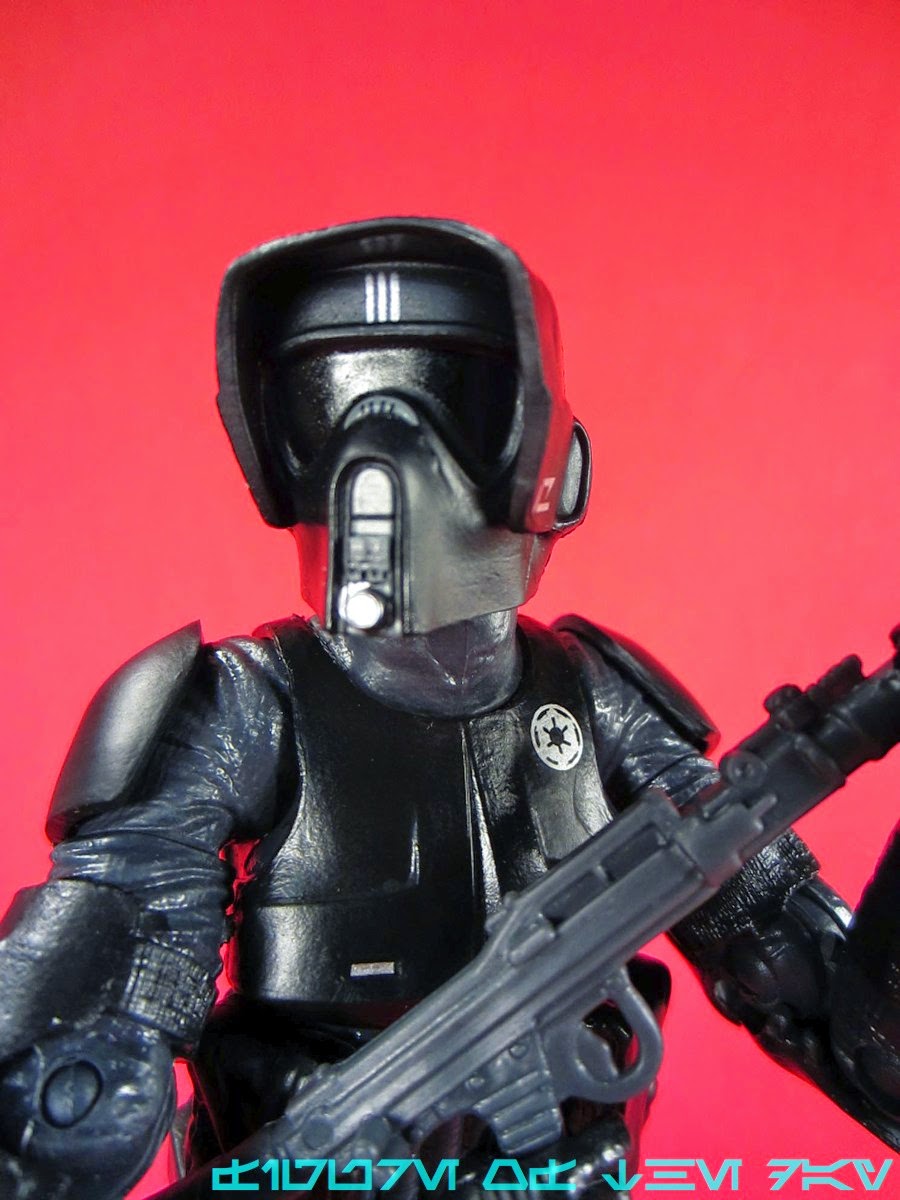 If the black trooper and the bike were $50, I'd drag my feet but ultimately cave in and buy it. Considering it had the Shadow Stormtrooper Commander too, it seems like a relative bargain.  Obviously those looking to rid their lives of the menace that could be Hasbro making up unlimited new variations should skip this one, but I found this to be a quality item.   It's a little weird, but so nicely done that I can't help but love it.  It's most tolerable.

Collector's Notes: I haven't seen this one in stores yet, but it was available online for an hour and change last week.  I would anticipate it showing up in stores soon, and it would not stun me if this item was part of some Black Friday discount (heh) and was marked down a few bucks in the process.  Don't panic yet, but do make it a point to track this one down even though it sets the precedent of made-up repaints.  It's still cool.

Nice. Will integrate them in my RPG.