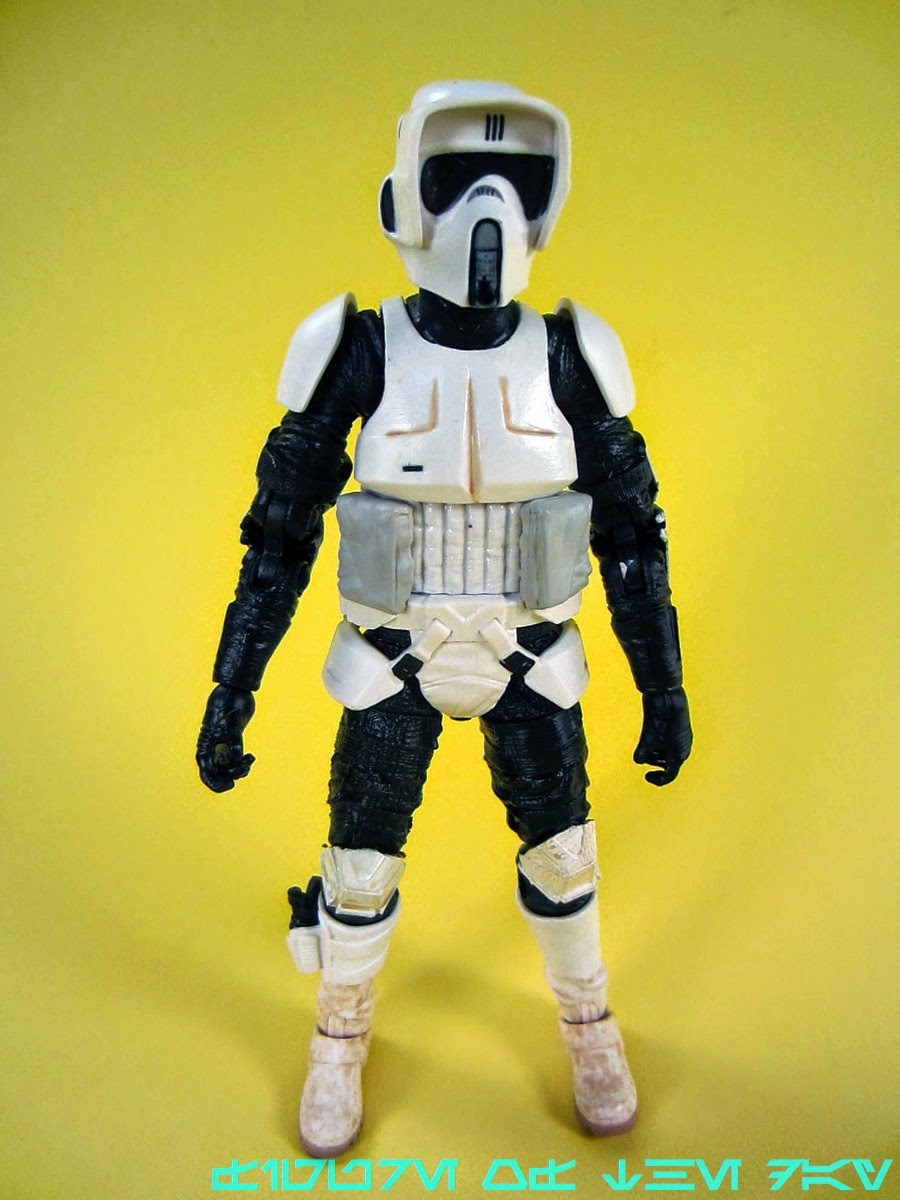 Bio: Chased by rebels, Biker Scouts race their Speeder Bikes through the Endor forest.  The Biker Scouts weave at breakneck speed through the trees, trying to outrun the Rebels so they can warn the shield generator station of the enemy's presence.  (Taken from the figure's packaging.)

Commentary: When I first heard that the Biker Scout was coming to the 6-inch line - with a Speeder Bike, no less - I was pretty happy.  Hasbro's track record on troopers is largely good - new releases are, with few exceptions, better than the previous version with one or more notable features that make it an unquestionable upgrade... or it's a repack.  Since this figure was a larger size, I assumed it would be pretty good.  I'd say the bike is good, and the figure's interactivity with the bike is very good, but the figure itself is maybe a C+.   This isn't entirely Hasbro's fault either - some of the blame can go squarely to the factory for the rough paint job. 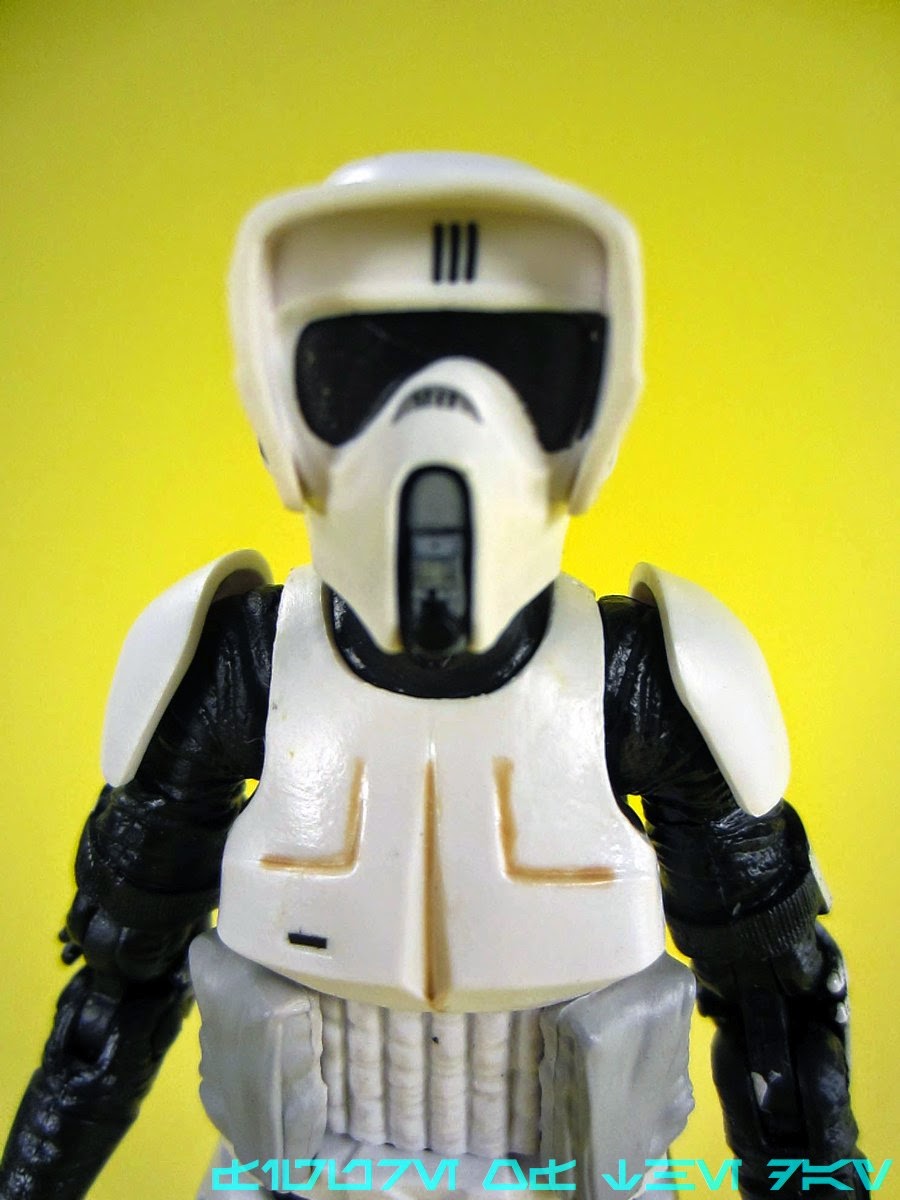 When making any figure, two of the most important things to focus on are the pose and the head.  This is where you get your personality.   With super-articulated figures, pose is less important because that is delegated to the consumer - and unless there are snags, he or she can do what he or she desires.  Hasbro has made a decent range of motion for this guy, giving him a generous 27 points of articulation. The arms and legs are exquisite, with various straps and belts hiding things like a shin cut joint, a thigh joint, a rotating bicep, and other things you would absolutely want for a figure of this size. The engineering is largely excellent and potentially Hasbro's best in this line to date. 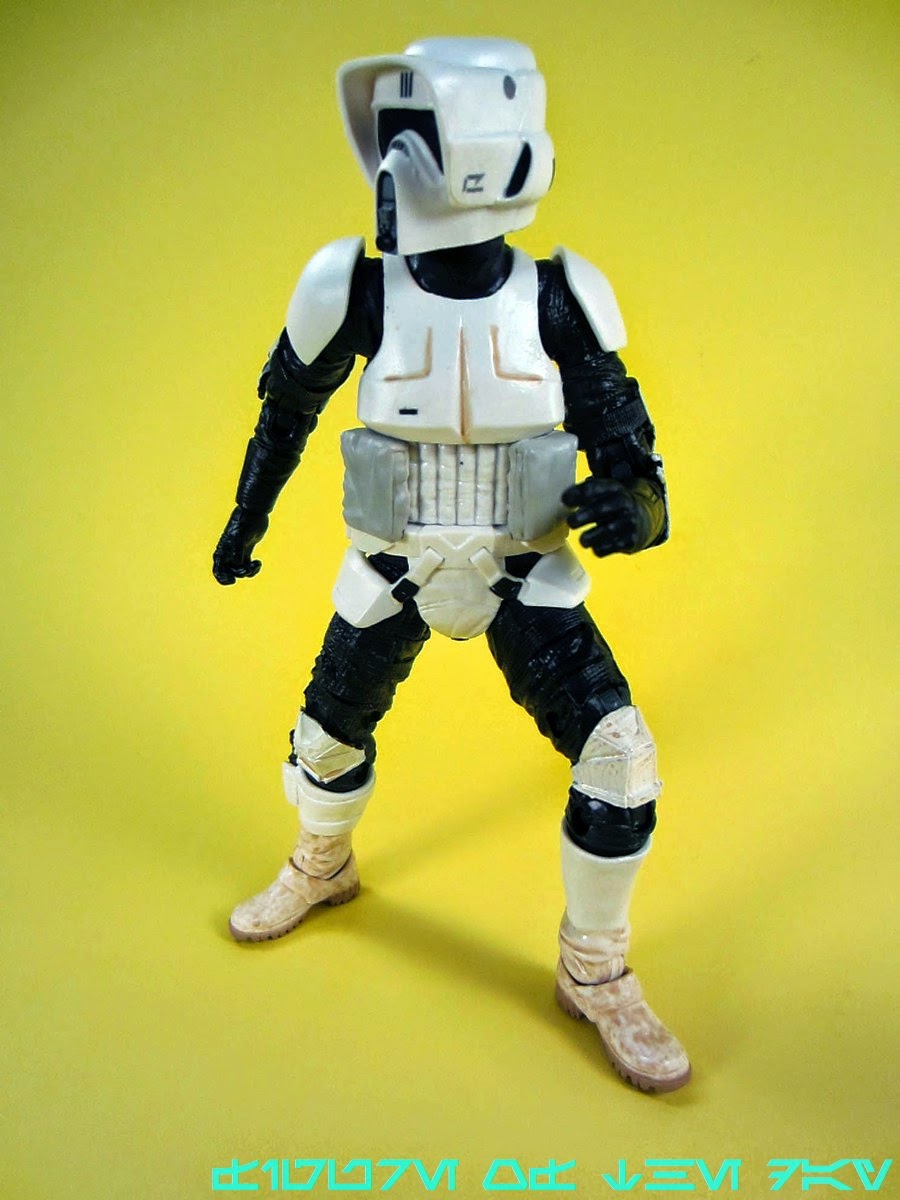 Sculpting and deco, well, can't win 'em all.  The helmet is a little smooshed, in part due to the inner tray of the packaging.  What's inexcusable, though, is the visor - it's painted off-center.  My sample is skewed over to his left-hand side, and you can see where the painter missed the mark.  The funny - sad funny, not "ha ha" funny - thing is that the other figure in the case had the same problem, but skewed over to the right.  Any way you slice it, it's a manufacturing error and one that could have been saved.  Similarly, pinching the helmet like they did not only makes it hart to remove from the packaging, but gives it a rounded look - and the helmet feels a little small for the body in the first place.  I dislike the mud on the feet and the unnecessary dirt filling in the panel lines on the chest, mostly because it isn't Tatooine.  Were Hasbro to rerelease this figure with a new head sculpt and better painters, the figure itself would be one of the best 6-inch action figures money can buy at any price.  Bad deco plus a bad helmet, though, there's not much you can really say about it being great.  It's good. 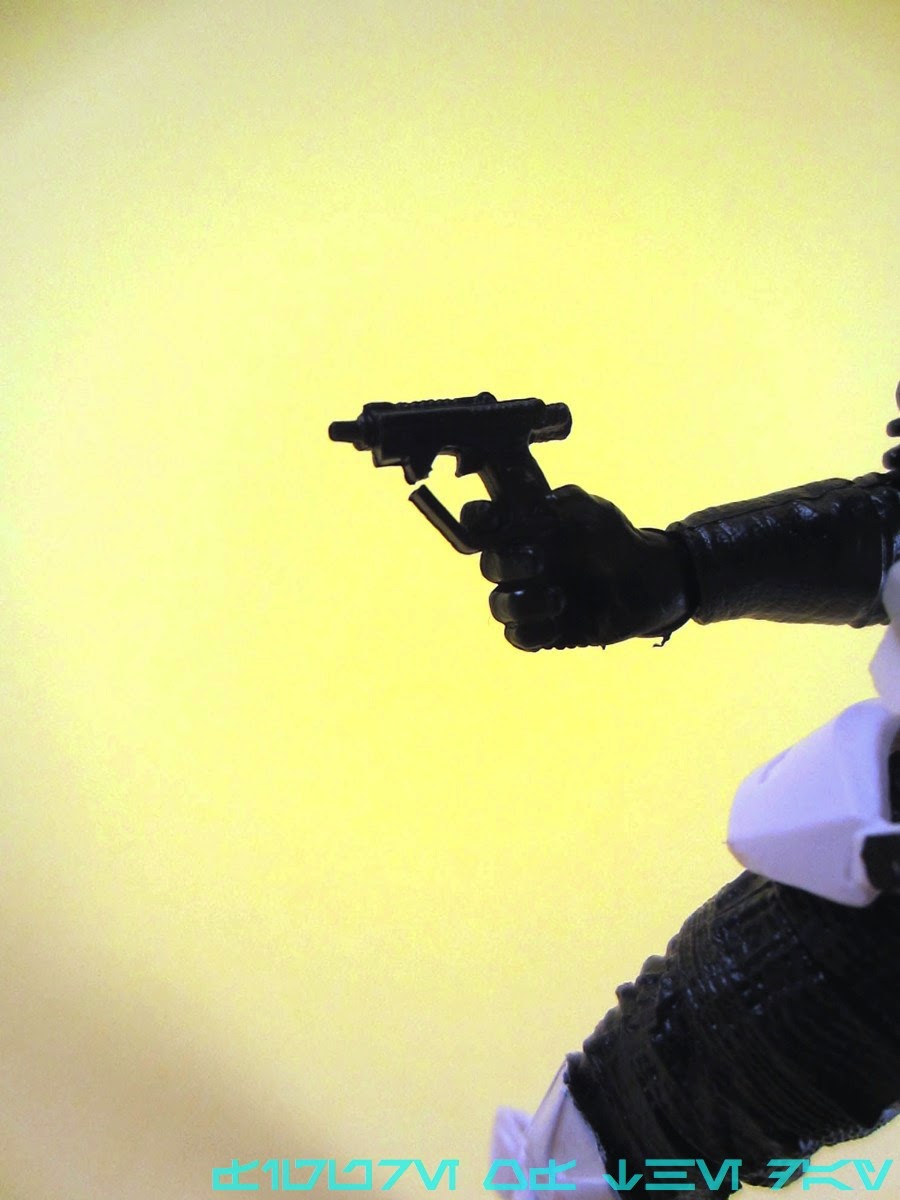 His lone accessory is a classic Biker Scout pistol, but here's the kicker - it's the same size as the ones with the 3 3/4-inch figures.   It's one or maybe two millimeters longer than the one that comes with the 3 3/4-inch The Black Series figure, and barely fits in his ankle holster.  Well, it fits, but it's not snug - it's going to fall out and you're going to lose it.  In real life, the prop should be somewhere around 8-inches long, depending on the resource.  This is a 1:12 scale figure, so the gun should be about 5/8-inch long.  Here's the rub - it is.  Hasbro made it the right size, but most fans don't realize that Hasbro exaggerates figures in smaller scales and that screws with our perception.  Some characters are given lighter skin tones, because they would look darker at a smaller scale. Some weapons are bigger so you don't lose them, and Playmates used to enlarge hands and heads of its Star Trek line in the 1990s.  Mine already tore at the grip - it I just put two fingers through it.  So I'm going to say that the quality is low and my experience with it is that I am not particularly pleased with how he interacts with the weapon.

The bike itself is pretty good - one of the two flaps on mine seems stuck, but it poses easily on the innovative display stand.  The clear stand has 3 balls on it, allowing you to display bikes at different heights.  I have no doubt this is due to the additional bikes they will be selling us with Luke Skywalker in his Endor Poncho sooner than later (after all, we have a Jedi Luke now) and Leia to boot.   It fits well, the figure is able to easily grip the handlebars and put his feet on the pedals - the pegs work nicely.  Getting his butt to stay on the seat is a little tricky, though.  There are lots of nice damage details all over the body and everything looks like I would hope.  It doesn't do much, but it doesn't have to - it's a prop for a collector, and a good one at that.

Overall I would say it's a mixed bag.  Good bike, so-so figure, awful and breakable weapon.  And easily lost weapon - if he does a face-plant (and he will) it flies out of his boot and across the floor.  Be careful with this one.  If you display him on his bike exclusively, it's a pretty good figure - all of his flaws are covered.  If you have him standing alone, you'll see them more easily and frankly, this should have been an easy one for Hasbro.  I've never had a figure tear up his own gun with his hand before.  The item is a very good deal as a display piece, provided you never open the box or never fidget with it once it goes on your shelf.

Collector's Notes: This figure started appearing in stores around August, shipping with Jabba the Hutt (sans any accessories.)

Email ThisBlogThis!Share to TwitterShare to FacebookShare to Pinterest
Labels: Biker Scout, Empire, Return of the Jedi