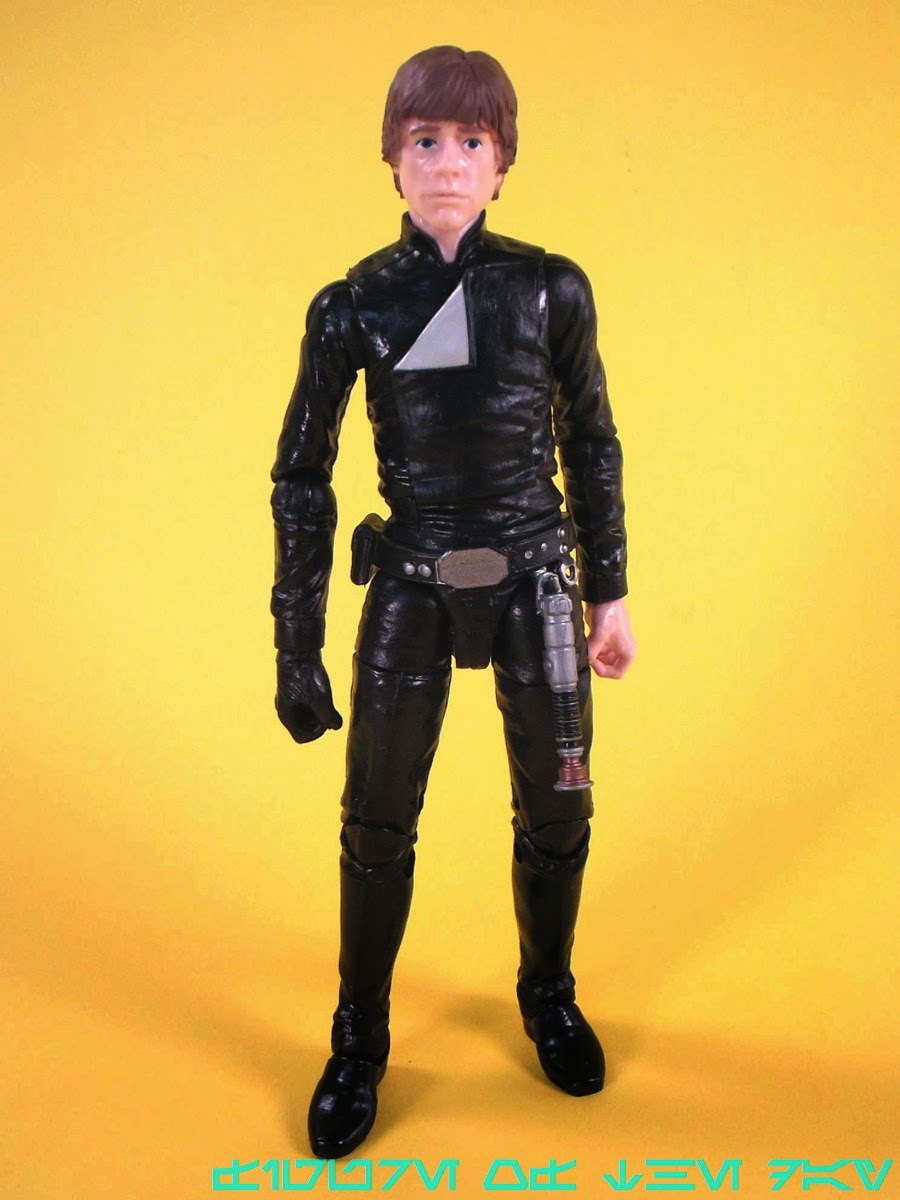 Bio: Luke goes to the second Death Star to confront his father, Darth Vader.  Despite giving into his anger, Luke refuses to destroy his father and rejects Emperor Palaptine's attempts to turn Luke to the Dark Side.  (Taken from the figure's packaging.)

Commentary: Lately, the things I expect to like the most tend to not be the things I like the most.  I always assumed super-articulated figures were going to be better for me, and it turns out I was wrong.  I figured from this wave, Darth Vader would be the best - and it turns out Luke Skywalker in his Jedi Knight duds from the second Death Star is the real winner.  The head is good, the articulation while not exceptional is very good, the deco is OK, but there's something about the expression and the poses that just clicks for me.  I was expecting glossy black paint on the boots and/or the glove, and got neither.  Actually, the glove is particularly weird - it has wrinkles on the back of the hand, but if you look at the fingers it also has clearly sculpted fingernails.   It's not something most people are going to notice, but I found it curious.  The belt is a rubbery separated piece with a hook to hang the included Lightsaber hilt, and unlike some other figures I won't name it fits perfectly. 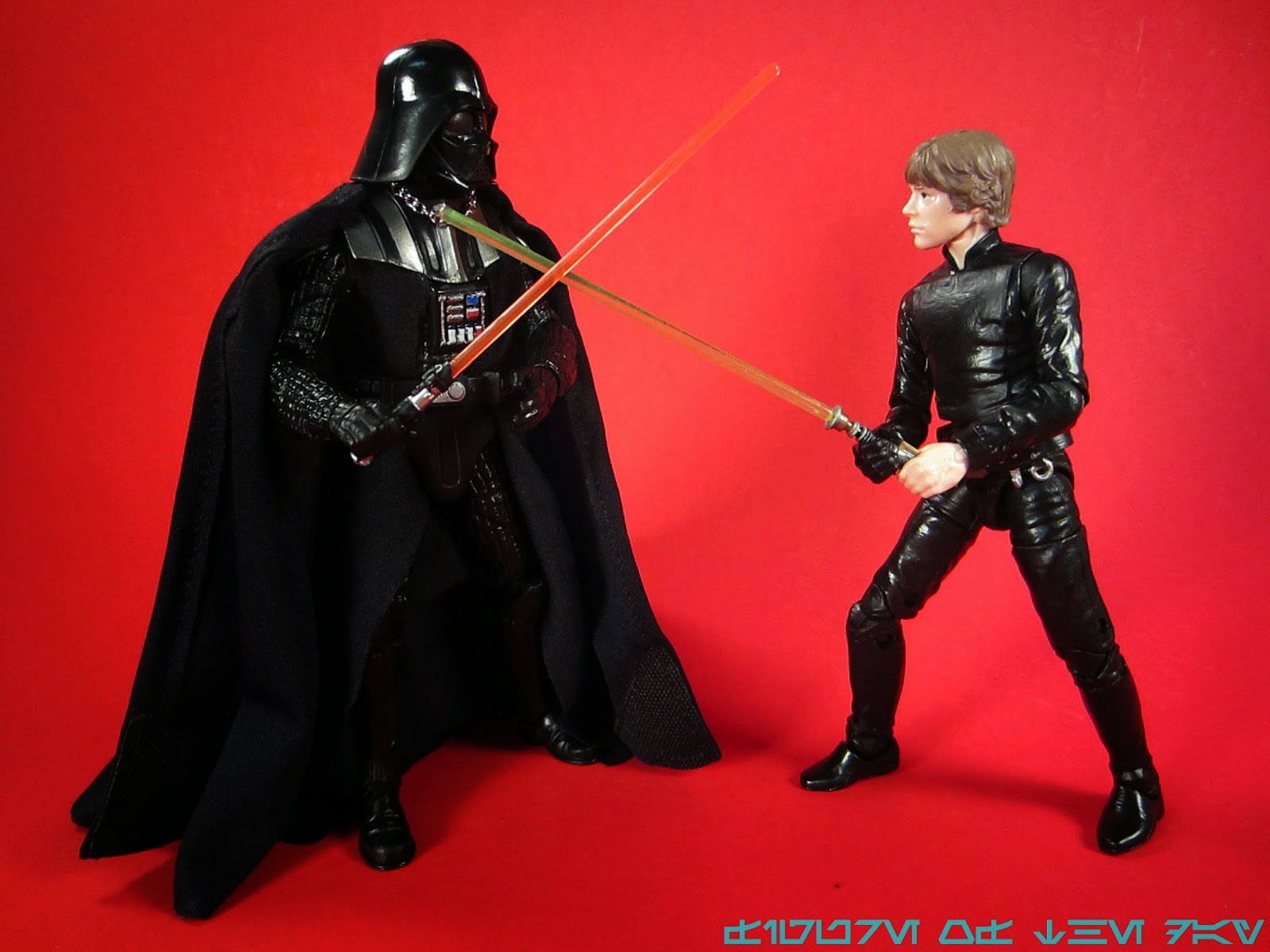 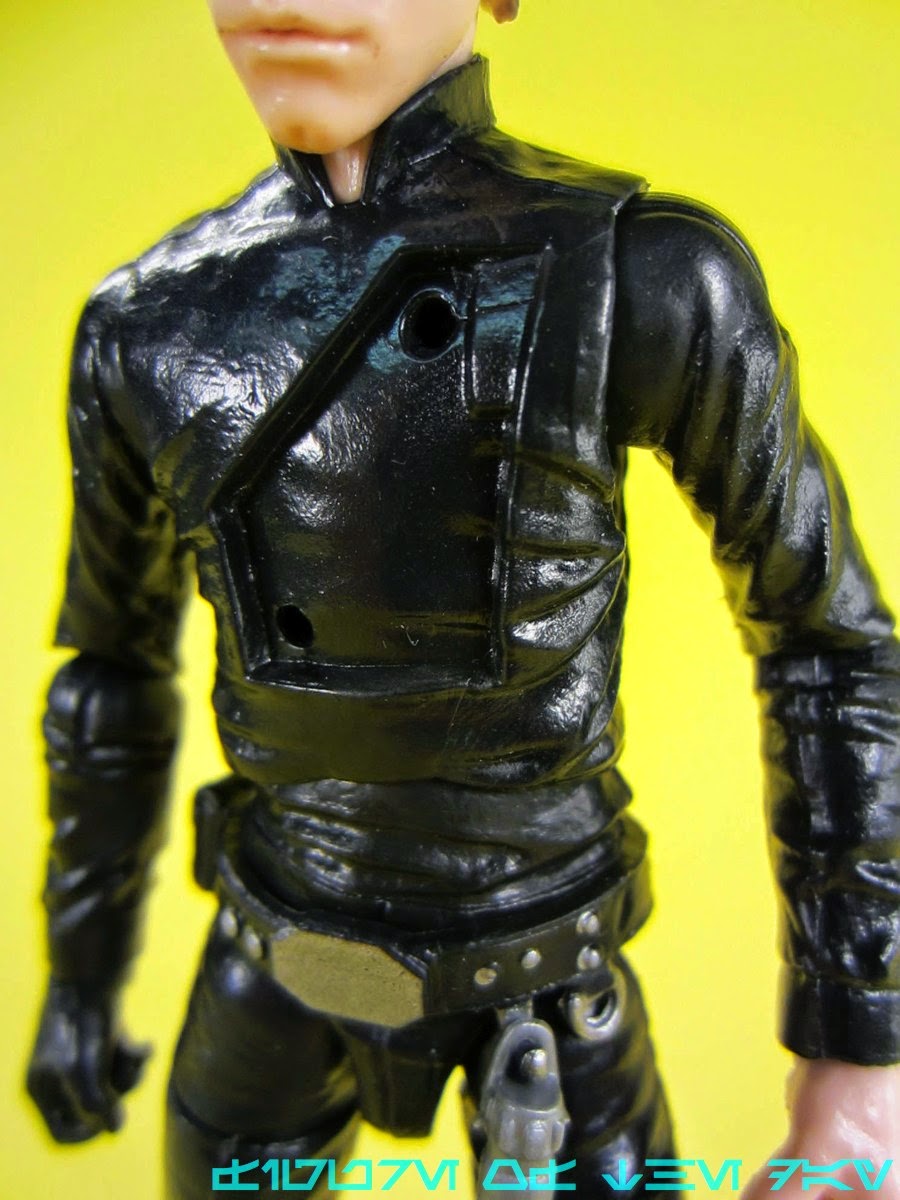 The wrinkles and folds are present, but not too overt.  This Luke 18+ points of articulation depending on how you're inclined to count.  Rocker ankles are joined by bend-and-swivel wrists, plus the legs have double knees, an upper thigh cut joint, and the usual quasi-ball jointed hips.  Other than a teensy bit of restriction on the elbows and shoulders, this is as good as a Luke can get. The hair is nice, the face sculpt is good, the face paint is really good, and along with the 12-inch figure and the so-far Canada Only Saga Legends figure this year, Hasbro seems to have now mostly successfully concluded its apology tour for Luke in this outfit.  Any size you buy, the 2014 versions are all pretty fantastic. 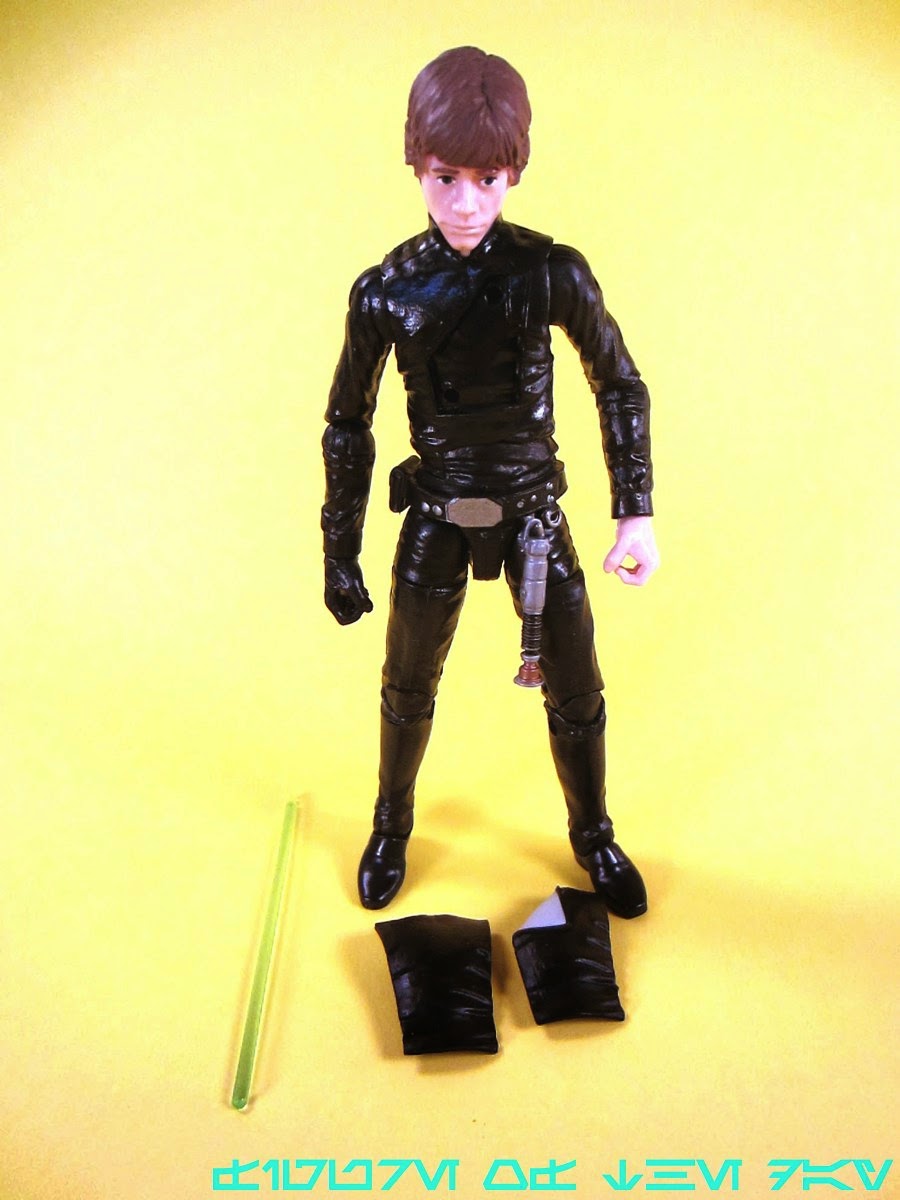 He's a little light in accessories - a saber and a blade are his only weapons.   The saber hilt is a little on the rubbery side, but the sculpt and deco are largely quite good. 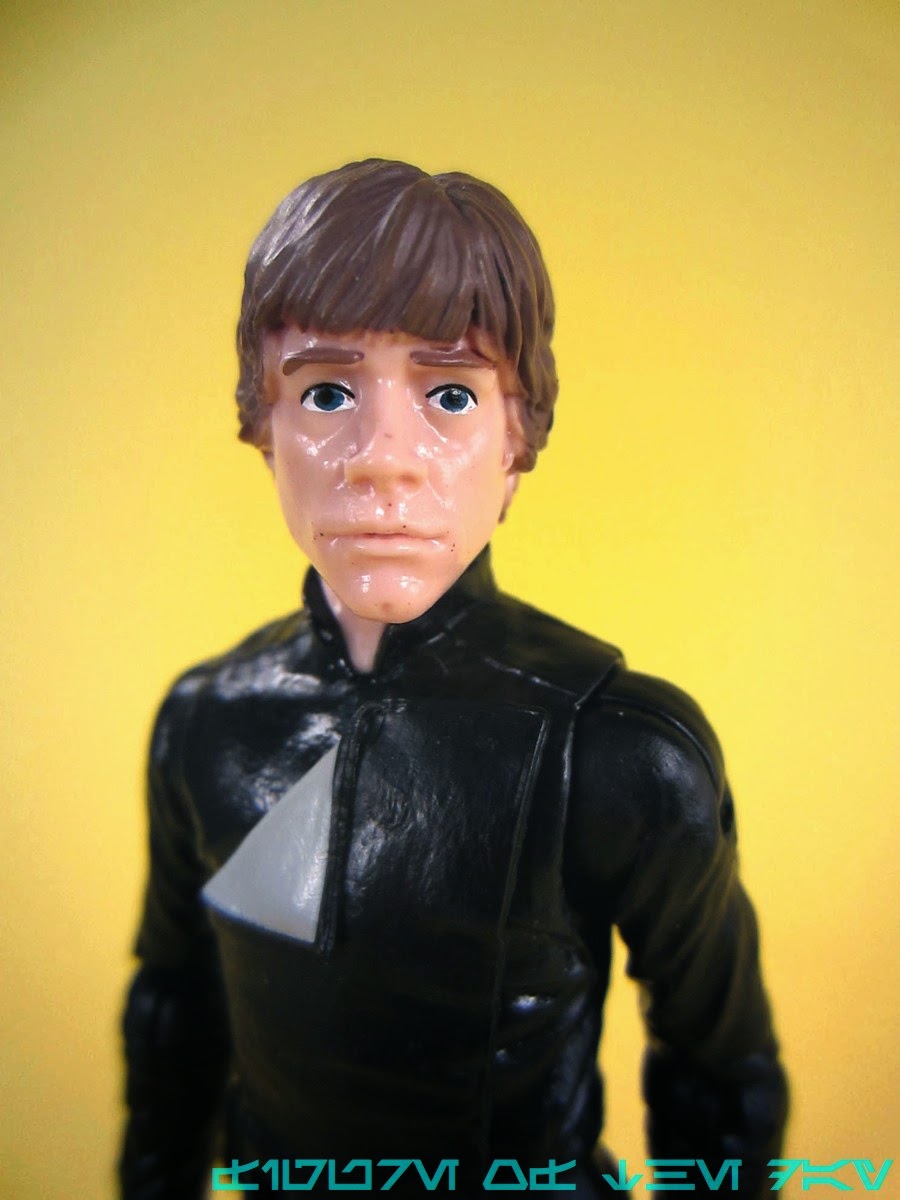 Luke has no problems standing or, even more surprisingly, sitting.  This may be one of Hasbro's most perfect action figures, and while I assumed I'd be drooling over Vader it turns out that Luke's relatively simple costume translates perfectly to a stiff-jointed 5 1/2-inch tall action figure.   Oh! And I almost forgot - you can pry off the front of his shirt to swap it out for a "flap open" or "flap closed" look.  Hasbro did some nice jobs here, but this one seems to be the best.  I love that he doesn't fall over, and that he has a pose that looks like Luke did on the big screen.  It's just plain nice, so go get one, if you will.

PS - you'll note that the "flap" is actually a whole front piece to Luke's shirt that pops off.  I believe Hasbro could easily squeeze one or two more figures off this buck - a thin plastic vest similar to what Luke had on in Jabba's Palace could be easily applied here, allowing Hasbro another use of this figure.  Especially if they recolor the right hand.   Get on that, Hasbro, toss in a blaster and a decent Jedi robe and I'll buy one.

Collector's Notes: Walgreens got a window on this wave which also included Concept Armor Boba Fett.  It was sold elsewhere soon after.

I actually really dig his face, it's got that ROTJ Luke "calmness" expression to it.