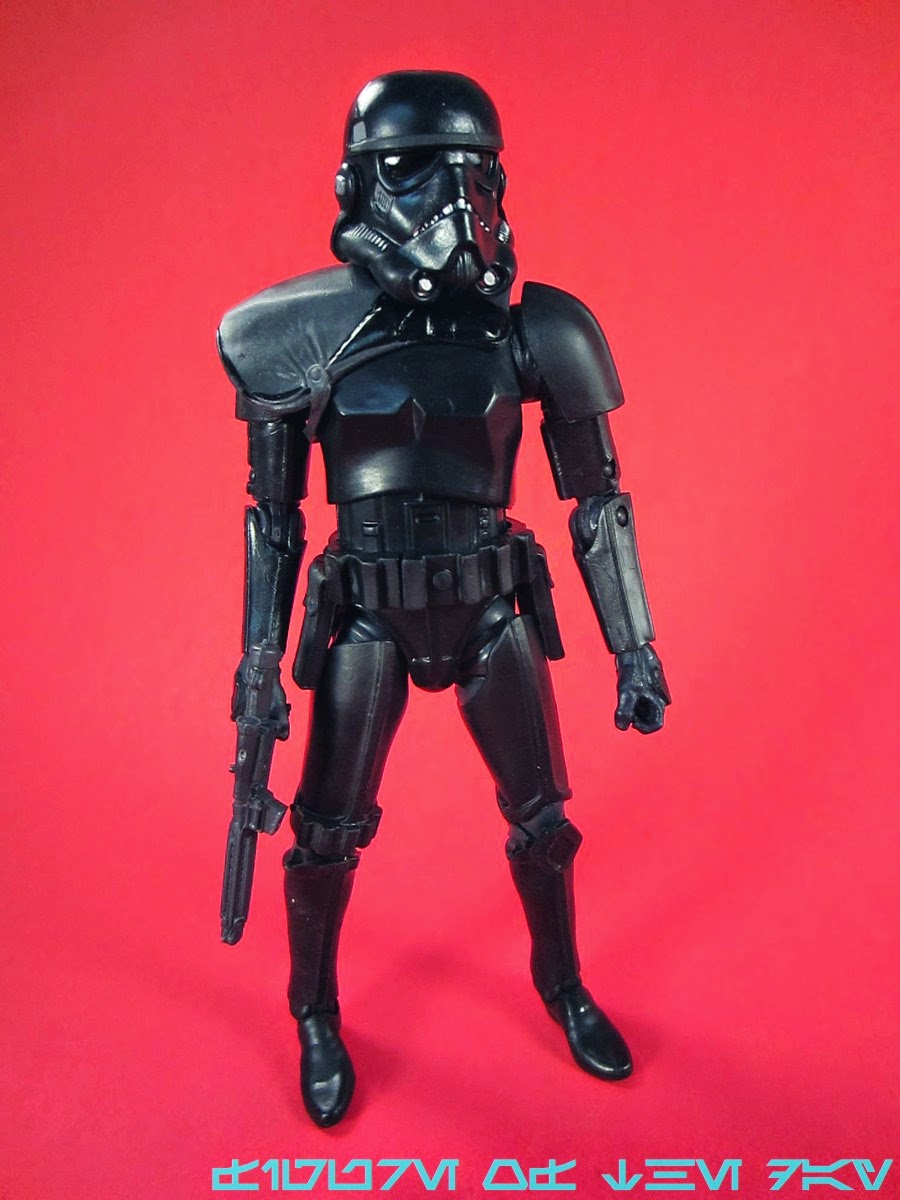 Commentary: It's a milestone - a few of them, actually. Shadow Stormtrooper Commander did not exist as a toy before this one - and I'm not entirely sure I remember seeing one in the comics, either.  It's also Target's first exclusive 6-inch The Black Series figure, plus one of the first (if not the first) exclusive Target shipped online before its first brick-and-mortar appearance.  That's how I got mine - with free shipping, how could I not order it? 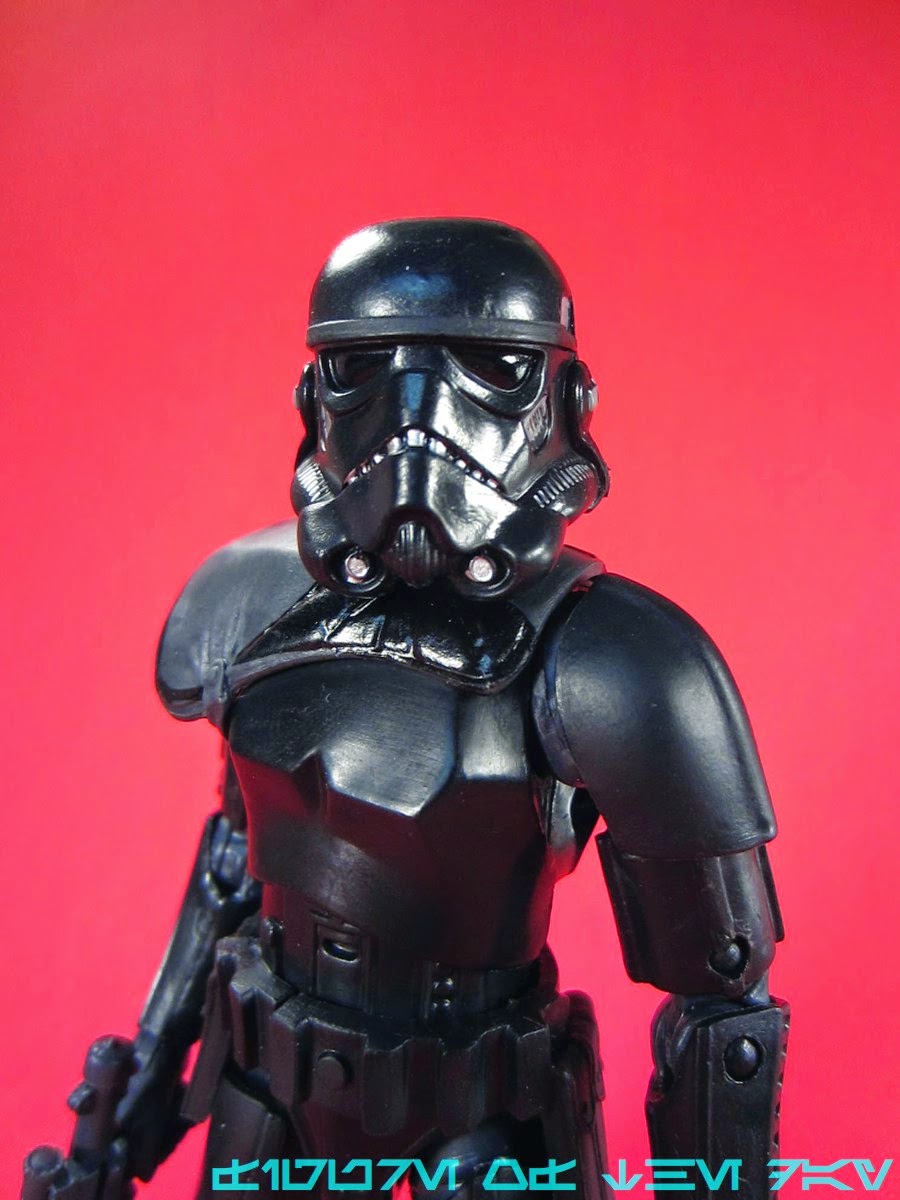 The black repaint is a safe obligation in most toy lines - you're going to get at least one in any modestly successful outing, especially in Japan.   Optimus Prime became Scourge and Nemesis Prime, Snake Eyes was basically a standard G.I. Joe male body with a new head and no paint (so he was cheaper to make), Cobra Commander has his formal wear, we even saw Cheetor become the likes of Shadow Panther, Ravage, and Tripredacus Agent.  Tomy in Japan redecorated numerous Zoids as night editions for the Guylos faction, and let me tell you, I want those so hard.  Oh well.  These are traditionally lower-run exclusives, so it's always a treat when they can be had with minimal fuss - which is what I'm hoping happens here at retail.  Th set has no "Target Exclusive" sticker, or the usual English/French packaging for sale in Canada as most recent Hasbro exclusives had. 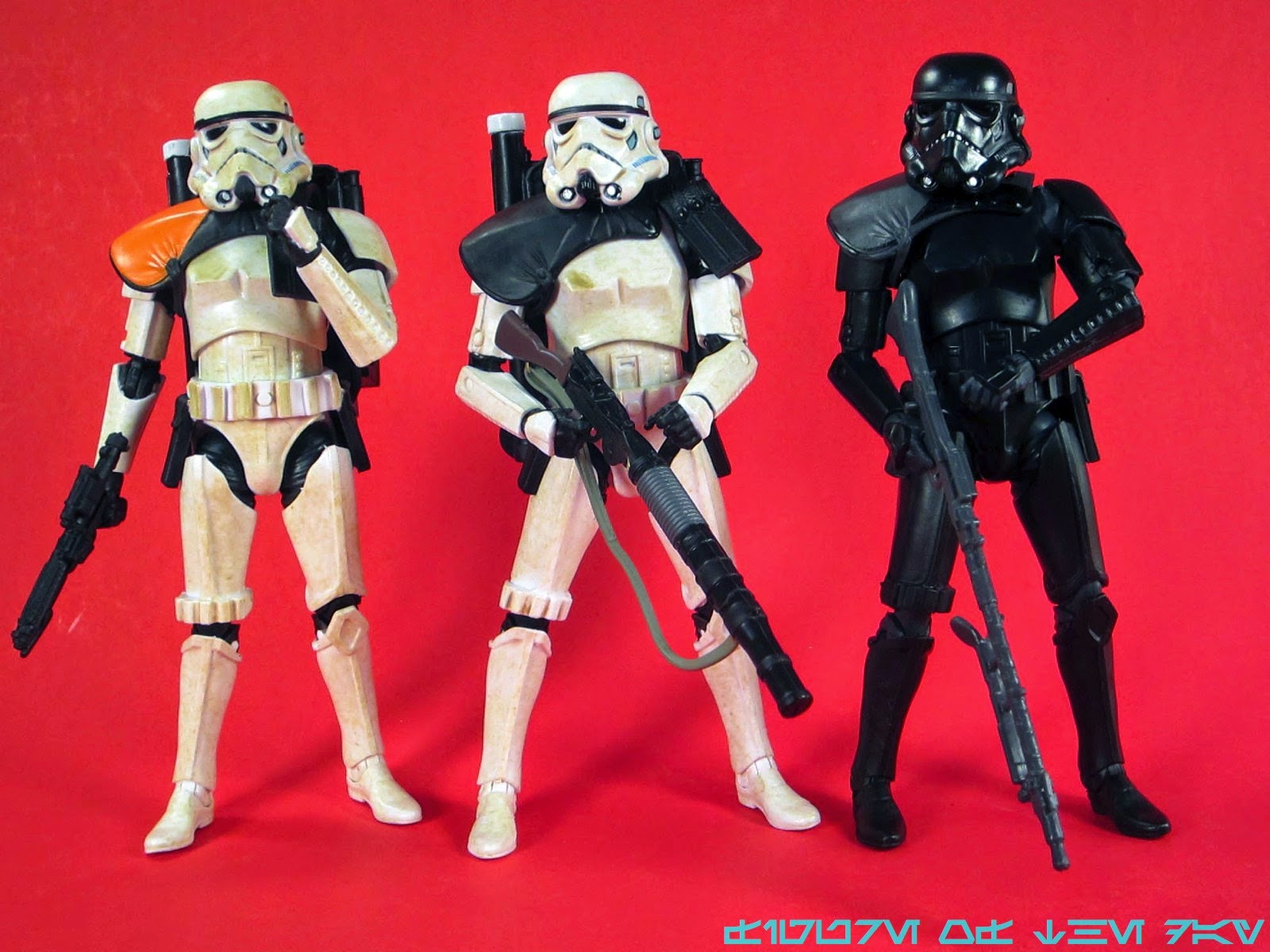 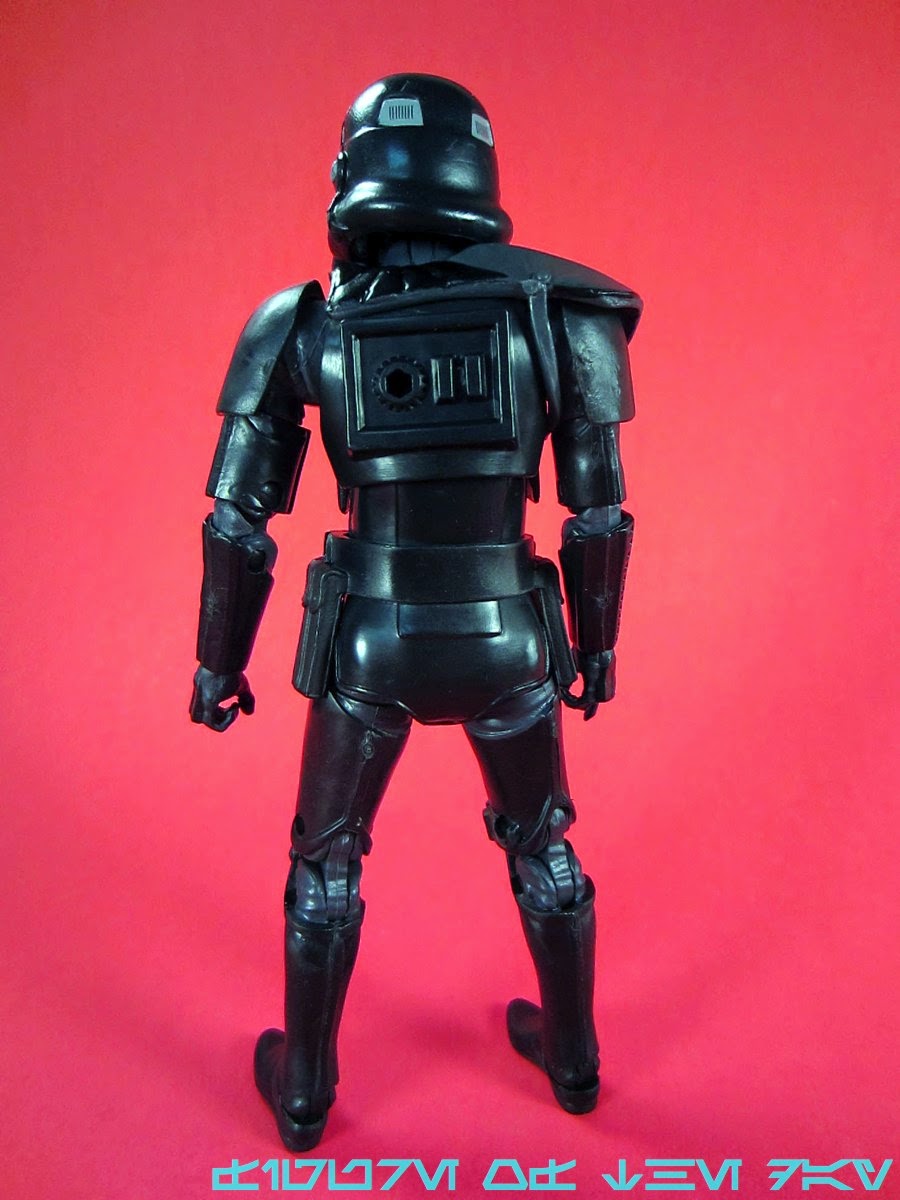 I had incorrectly assumed this figure was a Sandtrooper - but it has no backpack, even though it does have the hole in the back for one, plus the diamond left knee plate.  The deco looks good here - black plastic, deep dark grey gloves and body glove, and some silver in the mouth.  I assume this leaves the door open for a Shadow Stormtrooper with that mold (different knee, torso, helmet) - but hey, this is nice too.   Hasbro does a better job than they have to and they painted the soles of the black boots - I'd have dropped this paint app to save a few pennies, but hey, whatever.  The joints are super nice and tight, and weird little details - like the "eyebrow" stripe, the glossy eyes, and the painted dark, dark grey pauldron - sometimes pop out in low light.  It's a tiny detail, and not something you'd probably notice, but in the right conditions it does bring a little life to what is essentially a detail-sucking plastic singularity. 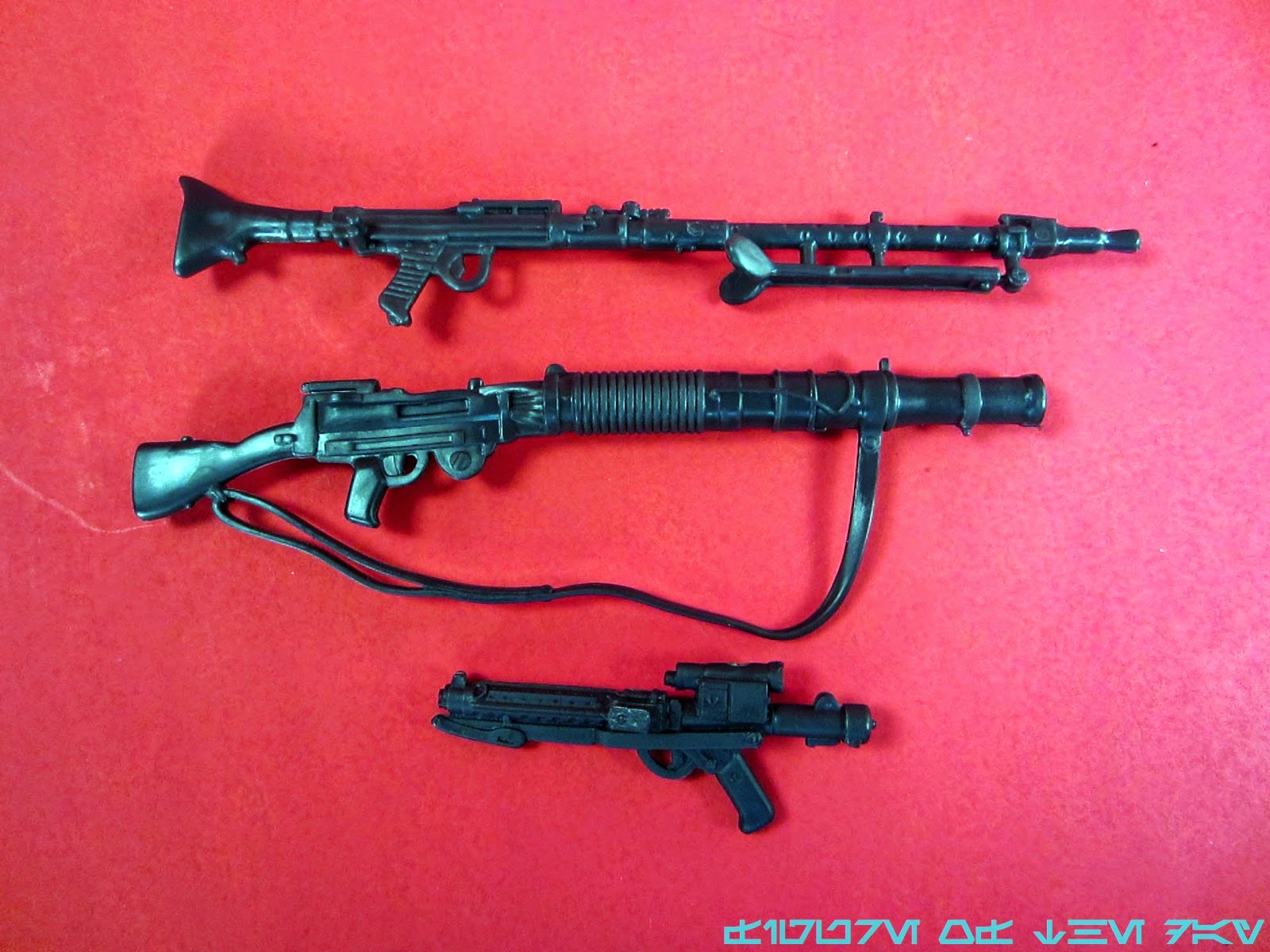 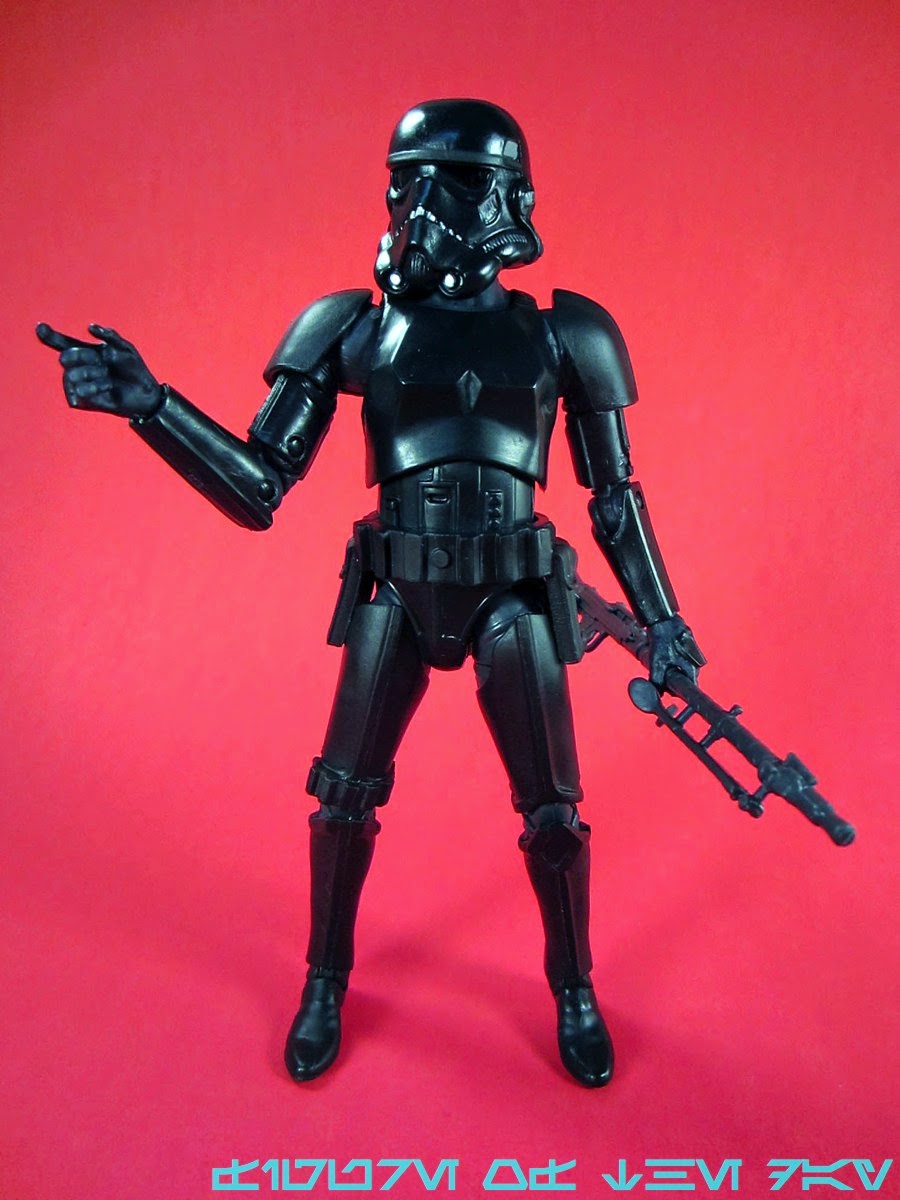 All three weapons are the same molds as a Sandtrooper's, but they are unpainted and cast in a lighter grey plastic.  Not a light grey plastic - it's still pretty dark, and it contrasts nicely with the deep black plastic armor.   This is one of those figures that your initial reaction will be "that's kinda dumb but cool I guess" and once you get it out of the box you'll go "Oh, this is really nice, I'm glad I bought it."  So if you missed it, you won't know what you missed - and if you got it, I have little doubt you'll enjoy it.  The box doesn't do much to make it look good given the dark Death Star hangar backgorund, so for best results buy one to open in addition to any boxed samples you may need to sit on.   It's a good one. 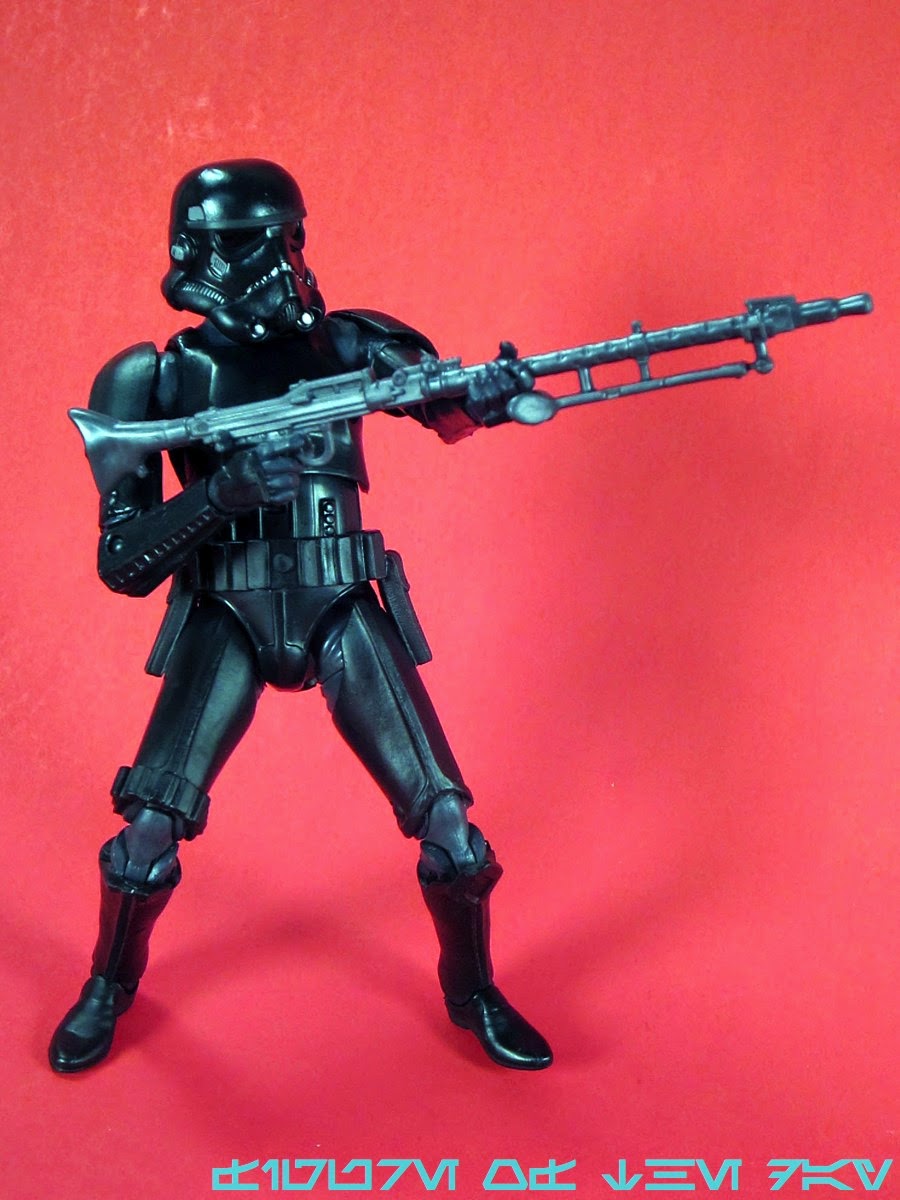 Collector's Notes: I haven't seen this one in stores yet, but it was available online for an hour and change last week.  I would anticipate it showing up in stores soon, and it would not stun me if this item was part of some Black Friday discount (heh) and was marked down a few bucks in the process.

Don't panic yet, but do make it a point to track this one down even though it sets the precedent of made-up repaints.  It's still cool.

are those heads removable? i was thinking of using them on another brand of action figure.

The ball-jointed heads do indeed pop off easily.