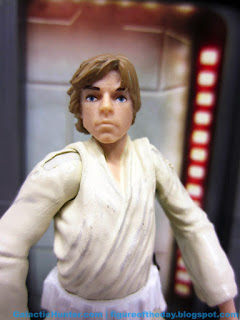 Bio: Luke Skywalker was a Tatooine farmboy who rose from humble beginnings to become one of the greatest Jedi the galaxy has ever known.  (Taken from the figure's packaging.) 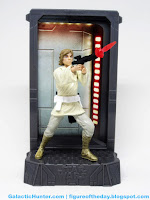 Commentary:  When I first saw Luke Skywalker as a die-cast metal figure, my question was "...why?"   Like some of you, I'm old and remember Hasbro's "Forged Figure" line in Titanium Series last time.  They were nifty metal figures that came in Sea Monkey-like cases for about $15.  These newer ones are a bit better, but the question remains - why?  It's not bad at all, but you can't help but immediately identify this as a gimmicky thing that probably won't last more than a year, even if they are executed quite nicely.

For the 25th anniversary, Hasbro put out a similar Luke Skywalker in a little diorama, but it also had a Leia and was about $15.  This gets you less figure for more money, but it's heavier and has a much nicer paint job.   Luke's head is a new sculpt, as is the rest of him - the body is metal with plastic arms and a plastic head that looks more than a little like Dax Shepard.   Because the body is metal, Hasbro opted to make it a pair of solid chunks - the waist rotates, but the legs are a statue.   The figure has really fantastic ball-jointed shoulders and a fine neck joint, but you aren't going to get as much out of him as you did your figure from The Vintage Collection a few years ago.   He does have a working holster, though, and that comes in handy. 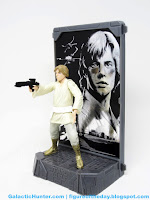 Luke has two Stormtrooper blasters - one has a red blast effect on the tip, the other does not.   This lets you put him in an action pose with the spare blaster tucked on his belt.  It looks cool, but it also looks a lot like something out of 2002 when Hasbro went full-on statue crazy with the "Saga" line and the 7-inch Unleashed figures.   This is clearly meant to be a display piece, but it's a cool one - it has a backdrop you can flip over, and there's a new paradigm in foot pegs.  The big display base has a whole mess of holes on it, and Luke has 4 plastic pegs - you decide where you want Luke to go, and pose him accordingly.  This is a neat idea, and it seems to work well on my sample.

I won't lie to you -  you don't need this figure.   Since the 6-inch The Black Series went from a great entry-level line for new or lapsed fans to a beast unto itself, here's a new expression you can start if you want to engage in a small collection.  The stands can connect to one another and you can keep a nice row of them on a shelf.   Given the price, you may not wish to do that, but I can't assume the line will go  beyond 20 or 30 figures over the next year.   I'd assume they have plans for the next one or two movies, but beyond that?   It'll probably just be a nice, small collection to briefly enjoy and move on.  Maybe they'll actually forge R2-D2 this time... 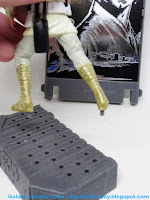 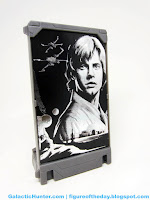 If you see these on clearance, though, get them. Get lots.  I bet you'll enjoy using the display base dioramas for other purposes.

Collector's Notes: I got mine from Entertainment Earth
, but they showed up at GameStop about a month ago in big shippers.

I was totally confused (and somewhat annoyed) by Hasbro's decision to make this collection at first. But I'm guessing this is a whole other thing and the money wouldn't have gone to 3.75" figures I'd want, anyway. That being the case, good for them. Judging from local stores they seem to be selling.