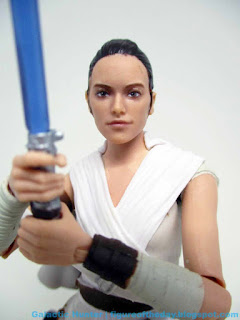 Bio: Rey continues to study the Jedi ways, but she grows concerned about what the future - and the force - may hold in store for her.   (Taken from the figure's packaging.) 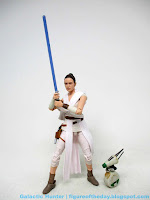 Commentary: We got very few completely new figures for the launch of The Rise of Skywalker, so another Rey was initially disappointing.  It kind of still is - but dagnabbit, it's good.   Hasbro did a good job on previous versions but clearly, someone set out to impress with this one.  As a complete package, she's loaded with gear and a bonus droid sidekick along with one of Hasbro's very best human actor likenesses to date.  That's no small feat - the "hyper real" face printing technology has gradually improved since early 2018, and now it's at the point where it's almost eerie.  How do they squirt out Daisy Ridley's face on a plastic head the size of a modest, slightly shriveled grape?  I have no idea - but Hasbro nailed it here.

While team Lucasfilm has been intent on making all Rey costumes (minus the island adventurer one) "the same but different," I can't gripe about this one too much.  Sure, it looks a lot like The Last Jedi costume got merged with The Force Awakens costume and hair, but now it's in Luke Skywalker's 1977 farmboy colors.  It also retains that loop, the vesty thing, and pretty much the same gear as before.   I'm kind of flummoxed they wouldn't at least give her a flight suit for her time in the various vehicles, but no.   No changing pants for Rey.  It's not allowed. 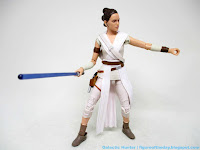 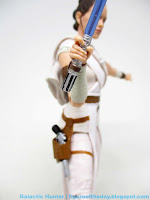 The figure has exceptionally good deco, with sharp face paint and great belts, straps, and wraps to keep everything in place.  The holster holds her blaster perfectly, and her lightsaber sadly was not designed to hang anywhere.  At least they upgraded the hilt with the repair band, and they also engineered the staff to pop apart in multiple places.  I can't help but wonder if, at some point, there were plans to integrate her new yellow lightsaber blade.   This version of Rey's staff splits in four pieces if you like - which undoubtedly ran up the cost a bit. 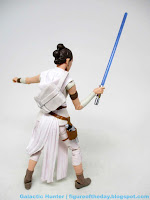 Rey's articulation is still good, with better-than-average elbow articulation being a big reason why I'm impressed.  Any figure that can bend more than 90 degrees at the arm has been given some decent engineering time, so kudos to Hasbro for doing a good job here.    I'm able to get some decent poses out of the figure, and the range of motion combined with the great likeness makes this one of Hasbro's best figures at this scale.  That's saying a lot - and it also unfortunately raises the bar for all future releases.  Could any classic figure ever be made with an actor's likeness this perfect?  Could it even get better down the road? I can't wait to find out. 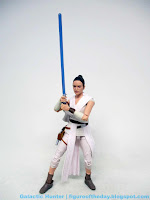 Considering the figure, the bag, the lightsaber, the staff, the blaster, and the droid, $20 is a bargain for this one.  You ought to get it if you can find one at a good price, or at least take a look at the head in the store.  You'll be impressed.  Hopefully we'll see more figures just like her in the future, but having said that I would be very happy if I never see another new Rey action figure ever again.  (Unless she gets an entirely new costume, or maybe that orange lightsaber, that is.)