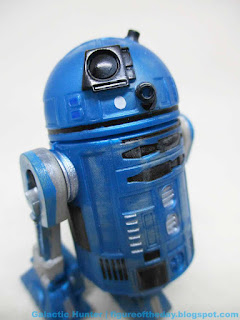 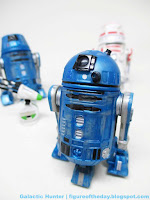 Commentary:  If you like new colorways or see droids as the indie designer segment of Star Wars you'll probably like R2-SHP and R6-LE5.  They'reboth pretty similar - but we don't have any other droids quite like them.  "Shep," as we're told he should be called, matches the reference illustrations quite nicely.  The figure is cast in metallic blue and metallic silver, covered in paint to simulate weathering and a rich deep blue metallic finish.  Yes, it's the same basic simplified build-a-droid mold you've been buying for ages - but it's blue now!

This looks like something Team Glyos might have done - the mostly metallic blue robot has spritzes of grey, silver, and black to bring it to life.  Little greeblies are painted on as is a grey sensor and a big black eye.   The subtle weathering may not be visible under all lighting conditions, and of course the cables on the feet are absent as most latter-day Disney droids dropped them.  You still get rolling wheels and can completely dismantle the figure, removing all three limbs and the dome if you're in to such things. 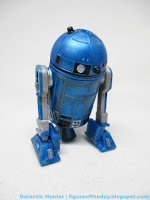 Even from the back, it's a striking design with grey underarms and a bright red stripe on the back of the dome.  The grey highlights are a bit more visible on the rear too, showing a decent attention to detail when the manufacturers could have saved some money just leaving them off the back.  Kudos.

Since there are hundreds of these buggers, I can't honestly tell you that this is an amazing revelation that will change your collection forever.  It's just R2-D2 in new colors again, and the colors are different enough that I would say Shep and D-O make the set worth buying - the other are also good.