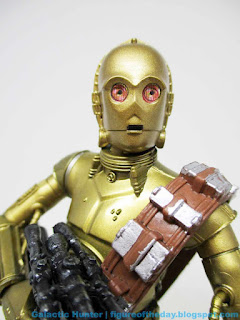 Bio: C-3PO longs for more peaceful times, but his continued sacrifice to the Resistance keeps him on the frontline of galactic conflict.   (Taken from the figure's packaging.) 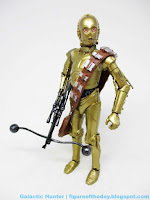 Commentary: I am writing this review in December, hours after seeing The Rise of Skywalker.  I kept C-3PO & Babu Frik - and several other figures - sealed until I saw the movie.  I've generally been more interested in some of the major redo figures after seeing the film, because in all honesty I could've given a bandolier and bowcaster to the droid for years and haven't.  Chewie and Threepio were, as I've written, my first two figures as a kid so this mashup was intriguing.  And then I saw the movie.  Which amounted to "here, hold this."

This figure is competent but not exciting.  "C-3PO with guns" is not really anything new to fans of the 1990s comics, and it's not even new as a figure - C-3PX exists.   The figure is pretty much the same as the Galaxy's Edge C-3PO [FOTD #2,604] - which is the previous C-3PO with 4-LOM's arms.   He has silver rings on his shoulders, the wiring from The Force Awakens C-3PO, and the gripping hands - and bending elbows - of 4-LOM.  It's a pretty good figure with enough range to double-grip the bowcaster, which is something even Chewbacca can't do well.  Score one for C-3PO! Also his head opens on the back, so you can see the wires.  I like that. 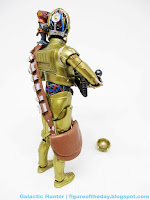 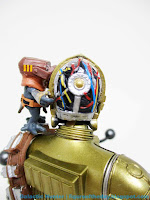 Other than that, it's an all-gold, clean, standard-issue C-3PO.  I've got so many 6-inch C-3POs now that I can definitely say that short of Droids cartoon deco, I never want to see another one.   The fact that this figure comes with Babu Frik will do wonders to make people want it - it's a cute alien - but C-3PO doesn't offer much new for completists.  Incompletists, on the other hand, will probably appreciate that you actually get some accessories with C-3PO, and more articulation, for the same price as previous mass retail and exclusive releases.  This is probably as good as a mass-release C-3PO will get, so buy one and enjoy.

Yeah I so thought he was going to be reprogrammed as an assassin droid and go all Rambo Stylz on the First Order! Very Anti-climactic!

You forgot about the color change eyes!