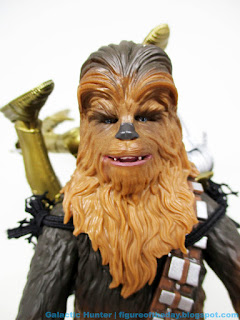 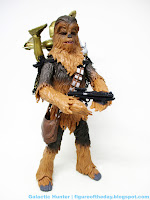 Commentary: Since Chewbacca & C-3PO are two figures, we'll split the review.  Chewie and Threepio were my first two figures as a kid, so I'm happy to see them together now even if it is a bit expensive.  Remember, we got a 3 3/4-inch Chewbacca with C-3PO backpack for about seven bucks in the not-too-distant past - but this time, Hasbro gives us a whole C-3PO rather than a slug with some limbs.  Chewbacca is, as always, a full Chewbacca.   It is unquestionably overpriced for what you get - previously, a full C-3PO and a full Chewbacca were each around $20.   Many of the parts here are reused, so I don't really get why it has a mark-up - other than, of course, we're going to buy it because there's not a lot of great original trilogy stuff to buy.

Chewbacca is a mold from which Hasbro has gotten a lot of easy sales.  There have been at least five previous releases of this mold with different heads or accessories or packaging, and most of them look pretty much alike.  This one has a new The Empire Strikes  Back-specific head and cargo net, with a good paint job and effectively the same body as before.  Articulation remains great, but he doesn't get a very tight grip on that Imperial blaster - but he can carry it.  The C-3PO net sits nicely on his back, and the head sculpt looks marvelous.   It's rare for Hasbro to do a non-roaring head these days, and this one gives you a better look at how he behaves in most of his appearances. 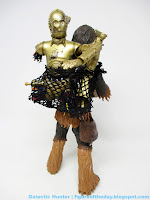 The Wookiee has no problems standing or looking acceptable, but the arm articulation could have been improved upon.  It's difficult to get a double-grip on that pistol.  If you already are happy with a previous Chewbacca, the main reason to get this one is for the head or for C-3PO - it's rather expensive with minimal visible changes.   Completists, it's a good fit - it's also probably one of the better Chewbaccas if you're a new collector just looking to pick one to add to your stash.   If the price drops you really ought to run to get this set, but at $50 or above I can't say I'm feeling great about it.  It's clever on Hasbro's part, especially due to C-3PO, but Chewie himself doesn't offer a thing to warrant the price increase.