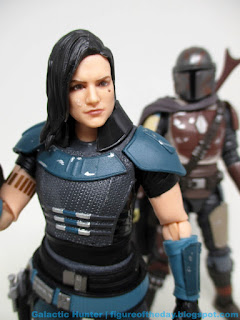 Bio: A veteran of the Galactic Civil War who fought for the Rebellion, Cara Dune is a seasoned warrior who has put her days of military discipline behind her, and now has reinvented herself as a mercenary.   (Taken from the figure's packaging.) 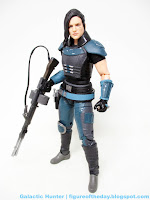 Commentary: Before it aired we had no idea who would be who in The Mandalorian, and it could just as easily be assumed that Cara Dune could be a regular or a guest star.  Her first appearance in late November introduced us to a Rebel shock trooper, which you can get because of the "tear" Rebel tattoo under her left eye and the vertical bars on her right bicep that recall the Republic and Imperial Shock Troopers you've seen in games and movies.   Or that would be my guess - as of my writing this, there's no guide to all this stuff yet.  Like with the movies, the small screen toys are a blank slate until the episode airs - and this is a good one. 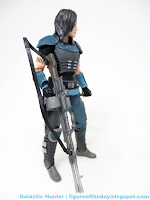 Cara Dune is a strange mix of modern and retro.  The hair and non-overly-sexualized chest armor, not to mention the ink, feel very much a 21st century flourish while the muted colors and gauntlets feel like vintage Star Wars.  If you saw this figure come right out after Return of the Jedi I assume kids and parents would assume Dune to be some sort of punk-inspired thing, but now we're just seeing flourishes of normal people.   I love the haircut, and the face printing is remarkable - not only does the portrait look great, but the tiny, teeny, atomic Rebel symbol on her face is one of the smallest details I've seen on an action figure.  It looks like a mole at first glance, but it isn't. 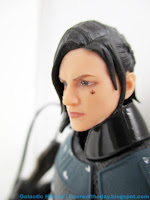 When I first got this figure it drove me up the wall trying to figure out where the knife could be stowed - it turns out there's a tiny gap in the left boot, and oh I wish Hasbro would reconsider product photography on The Black Series packaging.  It would be great to be shown when a helmet is removable, when a blaster can be stored, or that a knife fits somewhere.  She has no problem holding her weapons, or slinging the big one over her back.  In an interesting bit of synergy, her rifle has two barrels like the Amban sniper rifle that the Mandalorian uses.  Coincidence?  Probably. Maybe.  The figure is wonderfully detailed without overdoing it, keeping the blues and teals clean with excellent boots.  The texture is no slouch, either. 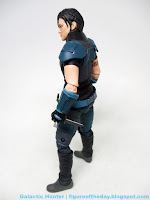 Hasbro has so far very slowly rolled out The Mandalorian figures - and there's a ton of opportunity here.  IG-11, Mando, Cara Dune, the Offworld Jawa, and the Heavy Gunner are a decent start.  I'm hoping to see a full range - preferably in a smaller size - but that's how I roll.  The big guys are great, but what I wouldn't give for 1980s-style 5-jointed figures of the entire cast and creature roster.  Cara Dune is a gem, so pick her up to go with your other Gina Carano action figures.  (I'm fairly sure this one has the most articulation, though.)

Great look at the figure. Dune definitely came to mind when I saw this figure in stores. I can't wait to see Mandalorian. I'm a bit late on getting started but hopefully soon. Thanks.