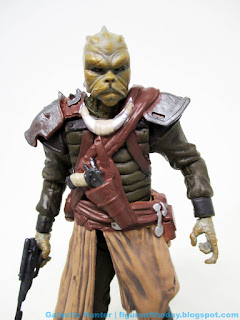 Bio: A Klatooinian served as the captain of a group of raiders. The Klatooinian led a number of attacks on a farming village on the planet Sorgan. When the villagers requested assistance in dealing with the attacks, the bounty hunter known as the Mandalorian and the ex-shock trooper Cara Dune provoked the Klatooinians, leading to a skirmish in which their AT-ST was destroyed and the leader was killed by the farmers Caben and Stoke. Having been defeated, the remaining Klatooinians fled, ceasing their attacks on the village. (Stolen from Wookieepedia. Packaging has no bio.) 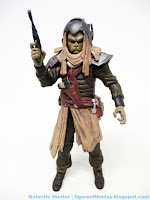 Commentary: As of my writing this, there's no big guide book to The Mandalorian so I can't compare the Klatooinian Raider to the costumes from the show. There was a lot of fog in that episode, so it might be close.  It's hard to know - much hunch is this was based on concept art, in part because it looks more like Kithaba or Tarados Gon than the more bulldog-like mug we saw a close-up of on the show.  The head seems to be new with a scarred eye and an added removable hat, but the body is clearly the Vintage Collection Weequay with a new smock.

The torso under the new piece is that familiar armor, but there's an added cloth element and holster sculpted to the chest as well as giant shoulder pads disguising the old Weequay pads.

The figure is standard fare Super Articulated, and odds are most fans won't notice, realize, or care that it was a remake of an existing figure with a new head and vest.   There's a definite "look" to Star Wars that allows the makers to remix elements to get something Star Warsy, and thanks to it being 90% recycled Return of the Jedi alien parts you could slap it in the Sail Barge and he looks like he belongs there.  He also looks great in the AT-ST Raider, a brilliant "pirate" capture of an old Imperial walker.   A "Wampa Skull" TIE Fighter was used by Kybo Ren's pirates in Droids, and yes, a toy was even pitched as an exclusive over 10 years ago - and obviously, that did not see release.   The "pirate" concept was out in force in Resistance, but not many toy vehicles would come of those cobbled-together behemoths. 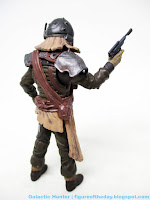 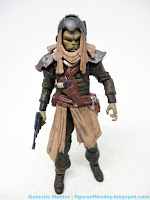 This set was the only 3 3/4-inch toy to make it out during the show's original run.   I assume this is because there are only 3 newly-tooled parts on the figure and the vehicle is just deco and cloth, but who knows.  Hasbro made something cool - but the jury is still out on its overall authenticity.   It's not essential but if you want a souvenir from the show in the preferred scale by old collectors, you have no other choices until spring.

Collector's Notes: I got mine from best Buy.

Good looking figure. I really need to watch Mandalorian and see him on the small screen. Good post and look at the figure and character.