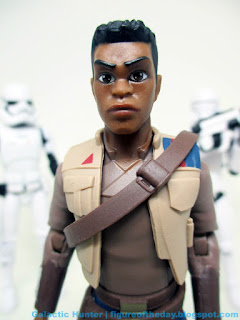 Bio: "Finn" was the nickname of FN-2187 ("Eight-Seven"), a human male stormtrooper who served the First Order until his desertion and subsequent defection to the Resistance during the First Order–Resistance war. Though trained since birth to be a loyal and obedient soldier, FN-2187's conscience conflicted with the methods of the First Order. For a time he was unwilling to support the Resistance, hoping to escape the galactic conflict instead of fighting for a cause he believed was doomed to fail. As the galaxy became consumed by war, the renegade trooper was ultimately forced to decide where his true loyalties lay.   (Stolen from Wookieepedia. Packaging has no bio.) 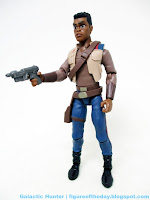 Commentary: Now that he has new hair and a new costume, Finn seems to not be getting as many toys.  As of my writing this there's no 6-inch or 3 3/4-inch figure based on his new costume, just this one 5-inch figure.  The stylized costume keeps the brown motif we got from the previous movies, but the vest on top of the brown shirt is significantly different.  His hair is longer, he has a new blaster.  The pants are still very much like Han Solo's, but the fact that he droppe
d the jacket and grew his hair make for a figure that's different enough to be interesting. 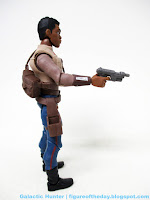 The likeness is John Boyega-ish, expressive but not overly so.  He stands, he sits, he could sit in a vehicle if Hasbro made one for him - I'd love to see if they  have the courage to consider an appropriate Millennium Falcon at some point. (They won't.)   Finn can stand and with 23 points of articulation allowing him a great range of movement, but it's worth noting his left shoulder has an action feature.  Pull the arm back and let go for a "quick draw" attack.  I can't say it's exciting - I find it kind of annoying, but it doesn't get in the way of posing him too much.  Figuring out just how much to pull it back before it clicks and won't work is tricky, but once you figure it out it works perfectly.

It would seem Hasbro is treating Finn as a kid-targeted character this time around, but anything can happen in an environment where nobody really knows what he's going to be doing - or if he's going to be surviving - the "final" chapter of the Star Wars Skywalker saga.  I'm hoping that Hasbro either finishes the main group of heroes in this style, or makes Finn in the other formats - the weird mismatched sizes are vexing, but at least we're not getting multiple figures of the character in the same costume in every size at launch this time around.   That hasn't worked out so well so far.

Great figure, and I like this format. Clearly won't see wave 3 at retail.