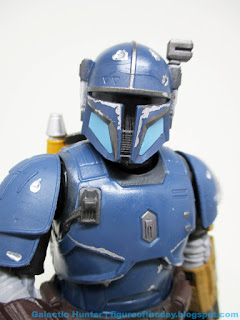 Bio: A brawny warrior encased in the strongest beskar armor, the mysterious Heavy Infantry Mandaloian is part of a secretive enclave of his people.  A born survivor, he guards a precious armory and helps to keep the flames of Mandalorian heritage flickering in this time of galactic chaos.   (Taken from the figure's packaging.) 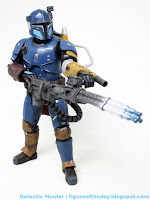 Commentary: I don't believe I'm being hyperbolic when I say you'd have punched a stranger in the back of the skull to get a Heavy Infantry Mandalorian back in the 1990s, because you are a terrible human being and were less mature  back then.  This is the kind of figure fans would dream of back in the day - it's something new built on something all-too familiar.  The name "Paz Vizla" appeared in the credits for The Mandalorian, so that may well be his name, but his origins come from a much more familiar place.  Elements of the original Kenner Boba Fett inspire the design with more blue and grey armor elements, in particular yellow and red armor.  Once you see the mythosaur skull on the left shoulder combined with the yellow left greave, it should be obvious that this figure was designed as an unsubtle nod tot he olds still out there.  The angular armor elements and giant gun seem like a post-Halo thing, but the rest is pure original Star Wars.  The battered armor, the nifty jetpack, and the worn gun all come together nicely. 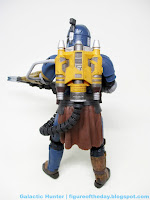 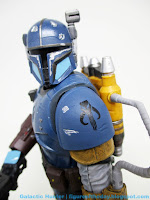 The figure's joints move much more smoothly than other figures. Getting him into a variety of big gun poses didn't take a lot of work, but I did need reference to figure out exactly how it was supposed to be carried.  The big gun has a cord connecting to the backpack, which itself has a second smaller cord connecting to the left wrist.  On top of that, there are multiple  handles on the big gun itself with a giant rotating grip further complicating things.  Some reference photos on the box - or a poster, or a trading card - would do wonders in explaining how the figure should hold his weapon.  It's somewhat complicated - even Hasbro's official photography for this figure clearly gave up or didn't even try.   I swear, some toys get no respect. 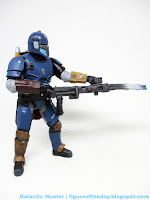 The Heavy Infantry Mandalorian makes excellent use of the abundant articulation - never have I been happier to have good, working bend-and-swivel wrists along with smoothly moving elbows.  Double-jointed knees with joints hidden behind the pads and rocker ankles ensure that this figure is going to be stable, dagnabbit.  This is one of Hasbro's best 6-inch scale efforts, and while I have no doubt there are missing details there are quite a few that also took me by surprise. The jetpack has little holes that seem designed for future blast effects.  There's a second hose hook-up on the side which presently serves no purpose, too.  Will this part be used again? Will we see a fire blast for the barrel on the left gauntlet?  Might Hasbro someday do a version 2.0 with the various scars on the armor painted more?  (And more importantly, why is this $30 without premium paint?)


And I totally forgot to mention there's a brown kama covering his butt that you wouldn't even miss if they left it out.  It's a nice piece and it means we may not see what butt beskar should look like.   I would strongly recommend buying this figure on sight, unless you have access to a better or cheaper alternative.  It's big and bulky, and it's just so nicely executed.  Go on, treat yourself.  You've probably not earned it, but I won't tell anyone if you won't.