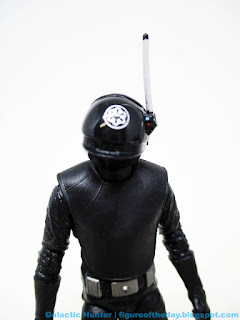 Bio: Imperial gunners/engineers were members of the Imperial Navy's Starfighter Corps (acting as a special sub-unit of the corps) who manned the various weapons and engine rooms of the Empire's capital ships, military bases, and both Death Stars.   (Stolen from Wookieepedia. Packaging has no bio.) 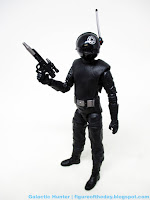 Commentary: Costumes change over time - it makes continuity tricky.  The Death Star Gunner has had several figures, but not all of them are alike.  There were differences between the Return of the Jedi and Star Wars costumes, and now we've got the Rogue One figure which came significantly later.  The Return of the Jedi model lacked the "shell"-like leather vest over the torso - this figure has one such vest, and it seems pretty close to the Rogue One incarnation.  It's missing the shoulder patches and I think some snaps on the front of the vest, but it's otherwise pretty darned close.   The figure is more or less standard fare for today.  Mind-blowing for 20 years ago, a figure like this with 29 points of articulation.  The ankles aren't the bend-and-swivel type, but he can stand and sit just fine with the newer hips featuring thigh swivels and some extra motion upstairs.   They did a good job here.

Detailing is good as always, with an excellent range of motion in the knees and hands.  If Hasbro ever decides to make a big Death Star, you'll be glad to have this figure.  It comes with a blaster that fits nicely in the hand, too.  The figure disappeared quickly so it's unlikely you saw them at retail, but if you do see them you should pick it up.  It's worth it.