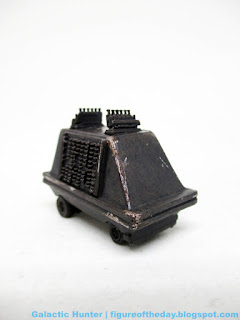 Bio:  MSE (mouse) droids perform simple tasks aboard starships and in military and corporate facilities.  They beep to themselves as they perform small repairs, deliver messages, and guide visitors, occasionally exploding into panicked squeals when confused or frightened. (Taken from the figure's packaging.)


Commentary:  New! The MSE Droid is an accessory more than a figure - but Hasbro treated it like a figure on the box, so I guess I will too.  When writing this review I assumed we already had one - but we didn't! This 6-inch scale robot has rolling wheels and, for some reason, gold accents on top. 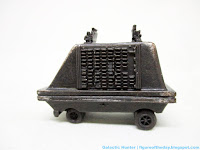 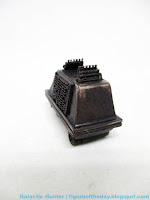 We've had these guys in various sizes over the years, regardless of scale - teeny ones, jumbo ones, but none specifically sold as 6-inch scale figures. There's no pull-back motor or articulation, but it rolls nicely despite tiny wheels. I am stunned how nicely they roll given the Mouse Droid's history, but there is a drawback - they're made of a translucent grey plastic.  You probably won't notice this, especially since they're functionally so darned good.

The sculpt looks consistent with other Imperial Mouse Droids, so it can go anywhere.  The textured paint job is pretty remarkable - I thought it was actual wear and tear at first glance.  Hasbro really nailed the scuffing on this one.  To the naked eye it looks dirty with worn-down silver, like something you left battered in a toolbox for years.  Under a microscope, you'll see the silver is all printed dots and Hasbro just tricked you. They're good at this.

It's a simple figure that's oddly great.  It doesn't impress but everything about this mundane accessory is so nicely done that I had no idea it was new at first glance. The coloring, the sculpt, the rolling wheels, it's hard to not be taken with the little guy.