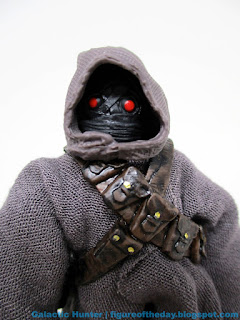 Bio: Ships traveling to and from Tatooine have resulted in some Jawas leaving their desert home-world.  Those that do arrive on new planets continue their old habits in their new surroundings, but their obsessive need for technology still drives them.   (Taken from the figure's packaging.) 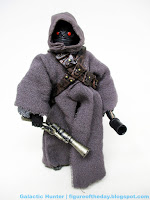 Commentary: This is an interesting one - when I first saw the Offworld Jawa I was told it was from The Mandalorian, but I didn't realize it'd be significant. Apparently neither do fans right now.   Hasbro took the figure from 2017 and changed the colors by giving us darker robes, red eyes, and by changing the material.  The plastic cloak has been replaced by a cloth one.  Other than that, it's pretty much the same figure.

The arm movement is hindered slightly by design, as bulky plastic arm sleeves are under the big cloth sleeves - this means it can be hard to get a good pose out of the figure.    The legs are wrapped nicely and sculpted to freely move, complete with rocker ankles.  As you didn't see them in the previous release, this gives you a good chance to examine the work Hasbro put in these figures under robes and in spots you couldn't see before.   I appreciate this.  The holster seems pretty useless, and the red eyes don't glow like the yellow ones did.  It's an extensive repaint. 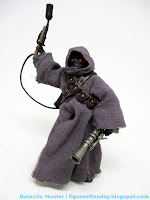 The Mandalorian also asks us to consider who and what Jawas are.  They're not native to all worlds, and they're clearly sentient - but a number of them are vaporized for almost comic effect while the survivors are seemingly willing to work with the killer in exchange for a certain object.  That seems really bizarre, but so was that entire episode.  It was strange, and sure to be analyzed by the film students of tomorrow.  I'd say get yourself a few of these guys. And the egg, if it they ever make it.

Now that we know the Jawas have colonized the stars, I expect we'll see more variations on them and their gear in years to come.  This was a really interesting choice for a debut wave figure, particularly considering how many astonishing costumes and actors have been in this series.  I hope to see another one down the road.

I rewatched the episode after reading a few articles bashing Mando for shooting first, asking questions later. The only Jawas to get vaporized were either actively stealing parts from his ship, or shooting at him. I guess the Jawas realize the inherent risks to their activity and prize the Egg above all those fancy parts.