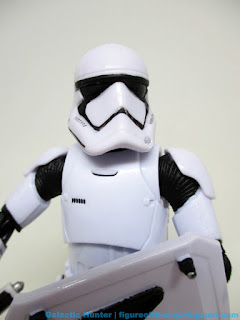 Bio: The first order’s Infantry units are trained from birth, given unit designations instead of names and fed a steady diet of first order propaganda to ensure absolute loyalty   (Taken from the figure's packaging.) 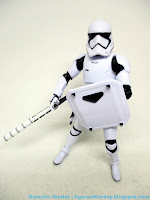 Commentary: This is my unhappy face.  Figures like this particular First Order Stormtrooper make me sad - because it doesn't need to exist.  It's a pared-down version of the Amazon exclusive Stormtrooper from a couple years back which is a decent accessory pack/tweak.  If you have that one, you don't need this one - but if you need more troopers, this one is fine.  You can steal his weapons for other figures. 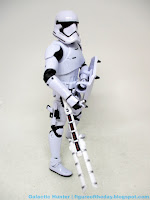 The core figure is the very nice 2015 SDCC First Order Stormtrooper [FOTD #2,162] which itself was tweaked for a similar Riot Control First Order Stormtrooper [FOTD #2,235] mere weeks later.   This figure is also slightly different from that last one.  There's a revised The Last Jedi trooper helmet with a sharper mouth, and there's a revised batom that has rotating clubs on the tip of it.   Other than that?  It's pretty much the same great figure with one fewer weapon - the normal, larger blaster has been dropped in favor of the smaller pistol.  You get the tiny pistol here, you get a baton, and you get a shield.  You get a perfectly nice trooper with rocker ankles and what seem to be slightly better elbows.   It's still basically the same trooper though - do you need more?  Well, here you go.

I'm glad it's a trooper and not Rey again under a new number, but I still would've loved to see a nickel spent on some blast damage on the shield, or perhaps some scorch marks on the baton.   It's OK.  It's fine.  There's nothing wrong with it.  It's just that there's not much new here.

Email ThisBlogThis!Share to TwitterShare to FacebookShare to Pinterest
Labels: The Black Series 6-Inch, The First Order, The First Order Stormtroopers, The Last Jedi, The Rise of Skywalker