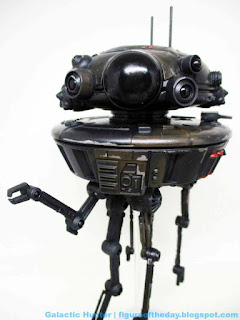 Bio: Commemorate the 40th Anniversary of The Empire Strikes Back with the Imperial Probe Droid figure.  Tenacious hunters, probe droids are armed with powerful blasters. (Taken from the figure's packaging.) 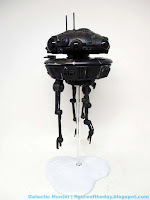 Commentary: It's gorgeous!  But why is it here?  The Imperial Probe Droid is a curious figure to celebrate the movie that you're required by law to say is your favorite, even if it isn't true.   It's a big one, so it can't fit in a normal box - hence the higher price.     With the stand, the droid's dome is at 8-inches tall.

As with most Probe Droids, the head is big and rotates freely.  The antenna on top can telescope, and the blaster on the body can move.  The legs all combined give you about 22 points of articulation, which is super cool but ultimately not necessarily valuable - once you put the figure on the stand, you probably won't play with it.  The detail is perfect, the sculpting is top-notch, and the paint has little chipped silver bits and red highlights.  It looks really good, and will look great on your shelf of Hoth stuff with the Tauntaun and Wampa you hopefully bought several years ago. 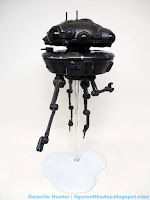 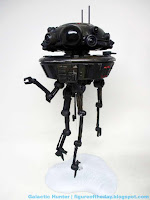 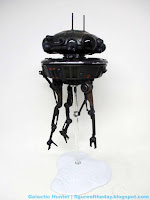 The sculpt seems to be from the same 3-D files that gave us The Last Jedi edition a few years ago, so if you loved that one you'll probably also love this one.  It was a bit simpler, but also had a Vader figure as well as a sound chip for $10 less.  That's life these days.   I doubt anyone is going to say that this $30 probe droid has more heft than a $20 basic 6-inch figure, but it's taller, it's wider, and you'll probably need it to menace your other figures.  Given what other big probe replicas cost, this is on the lower end of things.  I'd say it's worth the regular asking price, but even more worth a hypothetical sale price.  If it passes your field of vision, consider picking it up.

Email ThisBlogThis!Share to TwitterShare to FacebookShare to Pinterest
Labels: Droids, Empire, The Black Series 6-Inch, The Empire Strikes Back