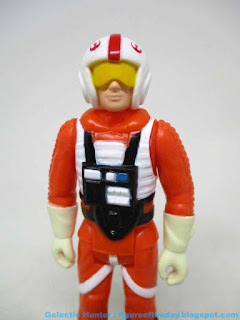 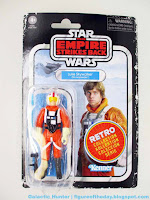 Commentary: Hasbro should just kill its traditional Vintage Collection and kid 3 3/4-inch line and do these for a while.  Luke Skywalker (Snowspeeder) is a lot like Grand Moff Tarkin, in that you can see the DNA of his design came from an existing figure.  While Tarkin owed a lot to the Imperial Officer, Luke owes his bones to Luke Skywalker (X-Wing Pilot) from 1979.  The chest console, arms, and legs all have existing elements.  You can see the wrinkles from X-Wing Luke carried over to Snowspeeder Luke, and the torso's detailing is built over the existing figure. The wrinkles around his crotch are also very similar. 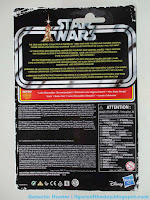 Much like the other Retro Collection figures, the details on Luke are a lot softer than the real vintage counterparts.  You can just see rounder, more fuzzy wrinkles and buttons on the computer.  I never realized just how crisp Kenner's old figures were until I compared them this go-round, so even though it's basically the same head, it's not.  The visor is down and the details are a bit more soft, but the proportions are all the same and it feels like a cousin (or bootleg) of the original.)  Snowspeeder Luke's hands seem to be mirror-flipped from the X-Wing Luke original - the right hand looks like the other's left hand, and vice versa.  Well, with the glove enhancements, otherwise the fingers seem to match up surprisingly well.

The figure stands up well, and has decent tight joints.  Unlike most original Kenner figures, both hands grip the accessories quite nicely - and it's a tight fit.  The new grapple gun is a perfect fit in the left hand and an excellent design on Hasbro's part, capturing the vocabulary and simplified proportions while axing some elements to keep it easy. 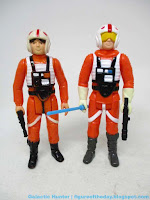 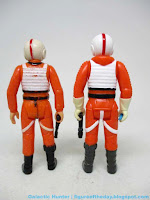 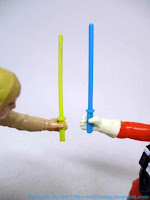 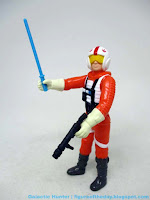 Aside from this being a new costume variant for Luke, the selling point for a lot of fans is an official blue Kenner lightsaber.  Jedi Knight Luke Skywalker legendarily has a blue lightsaber variation which most fans don't have and have never actually seen outside of product catalogs.   Grabbing this just to throw with their old Lukes might be a selling point for a certain kind of old-school collector, with smaller dots on the hilt so it's not obviously the same as the original. I appreciate this. 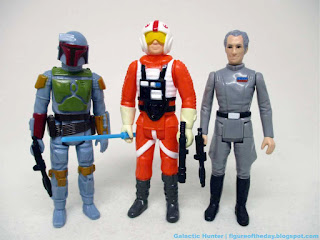 Since he can stand and sit and looks cool, and the butt is rounded off nicely so there's no square fanny when he sits, I'd give Hasbro a lot of credit for doing a good job here.  Even if his arms do seem a bit long, it's still super cool as a figure and I'd recommend getting it if you're an old Kenner fan.  I have no use for the companion board game, but all the love to Hasbro for giving us another one of these guys.  Could we get a fake Kenner Dagobah Luke next please?

Cool figure. Thanks for the review. It was my first look at this line of Star Wars figures. Haven't seen them in a store either. Good post.

Just received my second one in the mail. I would love if hasbro does a whole retro line on never produced figures. Using the original molds for c3po, r2 and r5 to make other droids is a win win for hasbro

Here’s to hoping that there’s a Jedi assortment of figures with associated board game. I’d really like a Battle at Sarlaac’s Pit game. Could come with an unproduced barge figure or a Gargan.