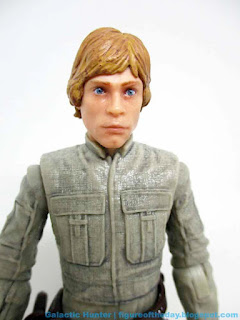 Bio: Along with his companions, Princess Leia Organa and General Han Solo, Luke Skywalker served on the side of the Alliance to Restore the Republic—an organization committed to the downfall of the Galactic Empire. (Taken from the figure's packaging.) 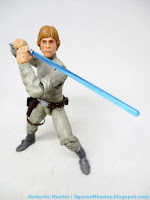 Commentary: It's an upgrade!  If you missed the first version (and even if you didn't) you should probably pick up Luke Skywalker (Bespin), a redecorated and partially retooled update of one of Hasbro's earlier (and for the time, pretty decent) 6-inch action figures.  Articulation was, sadly, not improve but the skin tone, lightsaber blade, and head were.

The reason you want to buy this figure is for the head - and hands.  The slightly less pale figure looks more alive, with a different head sculpt.  The hair is a bit more saturated, while the skin is significantly rosier with the "hyper real" face printing on the new sculpt - which is still pretty good.  And I also realized both the new and the old heads remind me a bit of New Values-era Iggy Pop.  The Jedi trainee has a bit more make-up and a hint of a pout, plus his unmistakable chin.  The face is a bit wider than before, and you can see that the hair is now a separately sculpted piece.  This probably costs a tiny bit more, but it looks better and helps prevent weird doll-like hair paint.  The hair style is very similar, but it's not just a plastic wig from the previous head -but you can see a lot of similarities. 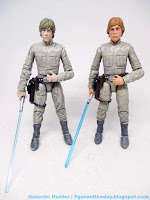 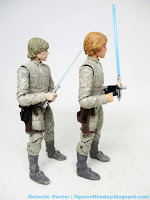 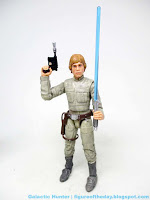 As accessories go, the blaster isn't hugely different and neither is the lightsaber.  You will, however, immediately note that the blade is a much bluer blue - it's a big improvement from the clear, faded stabbing device from last time.   Along with his skin and his outfit, everything looks just a little more alive this time around.   The costume itself isn't terrible different, the lightsaber hook on the belt is painted silver for this outing and it seems like the sweaty paint wipe is more subtle.  Overall, it's better. 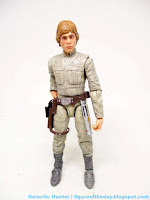 Articulation is the same.  It was good then, and it's OK now - we've since seen dramatic improvements in shoulder, neck, and elbow articulation so this feels like it might be a stepping stone on the way to another resculpt with a new torso and new arms later.  You get a very good range of movement with about 27 joints.  That ain't bad, but as any toy dork can tell you, having two joints on an elbow doesn't guarantee optimal motion.  A Xevoz figure has fewer joints, but a greater, unencumbered range of movement.  Luke is still very good for the standards of the first release of this figure's mold, but you know and I know Hasbro could blow it out of the water today.  And maybe they will for the 45th or 50th anniversary, or in a set of duel 2-packs, or something or other later. 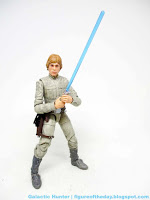 If you missed the first release, or just want Hasbro's best, get this one.  It's $20, and it's a great costume.  Also the holster works better for the pistol this time, but the painted lightsaber clip is a smidgen tougher to get set up.  I still like it.

Packaging Notes: I like it!   It doesn't have fake weathering, and it adds a nifty 40th Anniversary ingot in the top left corner - it's obvious this is not a 3 3/4-inch figure, if you know these things at all. The back of the package is also a lot better, showcasing the first wave of this line... with still too dang much text.  It may also interest and not surprise you that this line is a limited engagement, with plans to return to the Archive Series in some form next year.