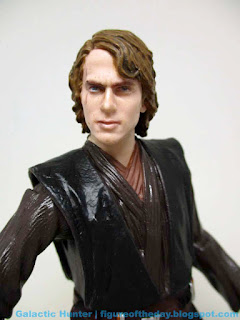 Bio: Anakin - now Darth Vader - turns to the Dark sde and battles Obi-Wan Kenobi in a lightsaber duel on the lava planet Mustafar. (Taken from the figure's packaging.) 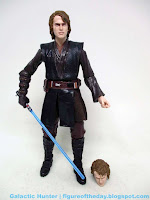 Commentary: I don't believe I got to review Anakin Skywalker on his debut 6-inch release - but this one is better.   If you see it (and you probably won't at this point), get it - unless Hasbro redoes the whole thing.   The initial release was good for the time, but his articulation hasn't aged especially well.  It's still good, but Hasbro has made such magnificent improvements that I'd be lying to you if I said this was as good as Hasbro could ever do.  It was certainly among their best for the time, and you can see just how good the original sculpted heads were with the new paint jobs given to them today.  The "bones" were always there - now you're getting the figure as the factory couldn't quite get it to you during its original release.

There's a normal head that looks a little sweaty and worn - and it's great! You get glossy eyes, a scar, subtle coloring on the lips, great eyebrows, and perfectly fine hair.  Hair is hard to do well - it's gotten a lot better lately, but it remains a challenge.   Anakin's heads come from before when hasbro did a lot more separately-molded plastic "wigs" for figures, so everything is painted remarkably well given that limitation.  He's got a real smoldering intensity with both heads, especially the second Sith head - which is even sweatier.  The hair on that head is more messed up, the cheeks are puffy with rage, and he's got glossy yellow Sith eyes.  You can also tell Anakin ugly-cries.   This head is why you want to buy this release of this figure - it's excellent. 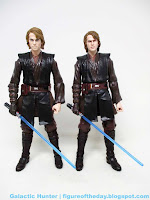 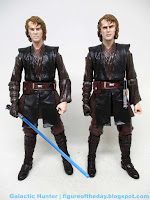 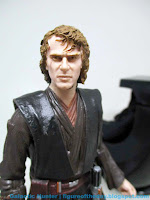 The figure itself is also good, but some new arms would also be nice.  The arms can bend about 90 degrees, which was considered average for the time as few Star Wars figures had double-elbows (unlike Marvel) and Hasbro didn't start getting deeper elbow cuts on most of its Star Wars releases until 2018.  The fabric sculpt was great, and the actual cloth elements to the lower parts of the costume do a great job fleshing out the figure without hindering mobility.  This was one of the better early releases in the line, as he had a lot of great poseability below the waist for duels and fun.  Above the waist, he needs some work - those shoulders could be improved, and especially those elbows.  You get bend-and-swivel wrists, though, and those are always great.  You can also slap the lightsaber hilt on his belt.   All in all, it works well - but I wouldn't say no to a partial resculpt, and neither should you.  It's tough to get a cool dueling pose with the arms, but you can tell all the elements are there to make this into a great figure if they're so inclined to make some changes for the (I assume) eventual third release of the character in this scale.

It's the best Anakin from the final prequel so far, and as the prequel kids warm up to collecting these get tougher to find.  Get it when you see it cheap next time.  Hasbro's repaint and reissue strategy can sometimes be a bore, but in this case you can see some real improvement.