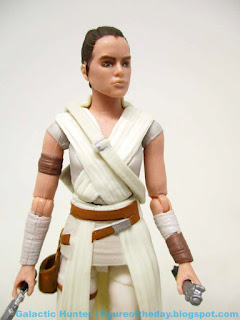 Bio:  Rey Skywalker was a Force-sensitive human female who, after years of living as a scavenger, became a Jedi during the war between the First Order and the Resistance. Unaware of her lineage as the granddaughter of the Emperor, Rey was the only name she went by prior to assuming the Skywalker surname. (Stolen from Wookieepedia. Packaging has no bio.) 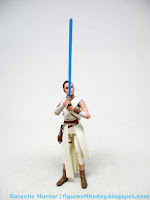 Commentary: Almost great.  This Rey figure is very representative of The Rise of Skywalker as a movie - there are parts of it that are great in the context of Star Wars as a whole, and there are parts of it that are just kind of weird.  There are elements that are unquestionably the result of top-tier craftspersons working at the top of their game, and there are things that are just plain bad.  Packaged collectors have a lot to love here, with a great sculpt and really good paint giving you the best-looking Rey at this scale.   The articulation is really good too, with an improved range of motion in the elbows and shoulders that do a fantastic job hiding the joints in there while keeping the motion as good as or better than previous offerings. 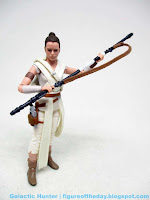 On the other hand, we lose bend-and-swivel wrists - they spin, and that's it.   She has those fantastic thigh-cut joints and enhanced hip joints, but the right one is unable to move thanks to how the holster is glued to it, while the left one can't really move thanks to the outfit draped over the joint being too stiff to allow motion.   This basically renders the hips, knees, and ankles more or less not useful - if she was a statue from the waist on down, I don't think my opinion of the figure would change.   The top half of the figure is oh so right, while the bottom half is just oh so wrong.  Her holster - at least on my sample - doesn't allow you to put the blaster in there, either.  There's nowhere for her lightsaber hilt  to hang on a belt or in a bag.   Hasbro clearly worked hard on ensuring the figure had lots of gear, a fantastic Daisy Ridley portrait, and subtle paint applications to give some slightly-weathered leather appearances, but in the end you really have to ask what purpose these figures serve. 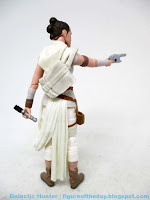 It's my hunch Hasbro saw this movie's 3 3/4-inch line as souvenirs for adult collectors - the joints are there, the deco is good, the packaging is fine, but Rey isn't meant to be played with.  This is a figure for you to look at and admire.   She has no problem holding her accessories, but there are many a quibble.  The lightsaber hilts are very small and a lot blacker than they should be while the blaster seems great, but is missing some key decoration around the middle of the weapon.   I've got no real problems with the staff or the bag, those are fine. 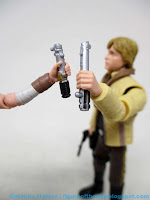 Hasbro should be given all the credit for what they did right here too - the neck, arms, and waist have a fantastic range of motion that easily put that half of the figure in the upper echelons of what Hasbro has done in its thousands of figures.  The deco is crisp, the face paint is astonishing given the size, and I can't believe how well that neck joints works.  I wish the 3 3/4-inch line had a rosier future, because this looks like another great learning experience for Hasbro to build on if we get new toys in the future... and we're not getting many.  This figure and indeed most of the Rise-era TVC figures were in pretty short supply, so hopefully you got while the getting was good.  I wouldn't say she's worth a premium on the secondary market, but she's worth the retail asking price (or a couple extra bucks to ship) if you can find her.  And maybe Hasbro will reissue her a few times, as they have done with many figures from the previous films.  This is one that could be given a few improvements with the parts of her outfit hanging off her waist and could be one of the best things Hasbro ever did - but as is, she's kind of stiff and not a lot of fun as a thing you can play with.