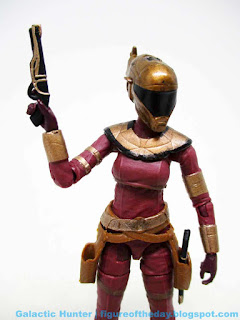 Bio:  Zorii Bliss was a human female native to the frigid planet Kijimi. She was the leader of the Spice Runners of Kijimi. (Stolen from Wookieepedia. Packaging has no bio.) 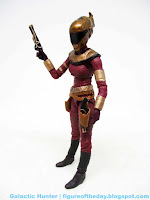 Commentary: As a toy collector and a toy seller, my biggest complaint about the Disney era of toys is they're not very collectible.  I mean that in the sense of there's no great "collection."  Back in the original Kenner days, the line was small but curated.  If you bought into it, you got at least 6 cool aliens per movie, at least a couple of droids, and they were all in the same scale.  Mercifully Zorii Bliss turned out well in both scales, but the problem is that she doesn't have a lot of figures to pal around with - especially if you started collecting the line in 2019.

Hasbro did a good job slicing the sculpt to work as a good action figure.   If you've been buying these 3 3/4-inch figures since Rogue One, you'll recognize the hips with more motion and thigh cut joints, the bend-and-swivel wrists, and everything else that nets you about 29 points of articulation.  You don't need this much at this scale, but it's here, and it's welcome.  She has no toy ship, but the design of the figure was born to be an action figure.   A mid-torso gold band hides the waist joint, the elbows hide in the bands of the garment, and everything else just fits in with the wrinkles.  This is almost like a movie costume designed by toy people - and for all I know, maybe it was. 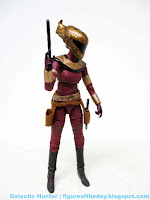 Deco is largely good, but it's more muted than the card art.  The gold isn't quite as shiny, the gold band under the chest is particularly muted.   The burgundy body costume is more brown than red, so a little more saturation would have been nice.  At this scale, though, you probably won't care.   As a fan you also probably won't care, because a) the character is sort of a non-thing and b) the figure may be best used in your Sail Barge, Cantina, or Jabba's Palace.  It's a good classic "Star Wars-y" design that would fit right in with any wretched hive of scum and villainy.   When writing about the then-upcoming prequels, that was sort of all I could hope for - if the movie was weak, at least we would be able to use the toys for something.   And that's what we got here. 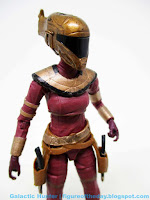 She has no problems holding her nicely ornate blasters, molded in black with gold trim.  Like her hands, they're small - and they fit right in the holsters.  There's not much to them, other than Hasbro just made them well.  It's weird but that's a recurring theme here - hey, they nailed it, let's move on.

If you're a classic purist - but allow for some filler - this is a figure you should get.   Women in Star Wars are far and few between, and since we'll probably never get Brea or Senni or Arica or Jess or Bazine Netal, at least you can throw Zorii Bliss in a diorama.  She looks cool, she's well-made, and Hasbro did a nice job here.  More like this, please.

Email ThisBlogThis!Share to TwitterShare to FacebookShare to Pinterest
Labels: The Rise of Skywalker, TVC, Zorii Bliss