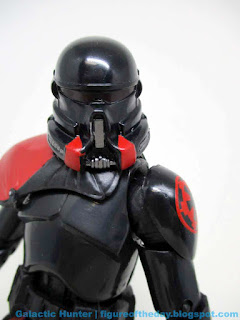 Bio:  Handpicked from the Stormtrooper legions for their aptitude and loyalty, purge troopers accompany Inquisitors on especially dangerous missions.  These troopers receive additional training  to make them a cohesive unit, formidable against any Jedi threat.   (Taken from the figure's packaging.) 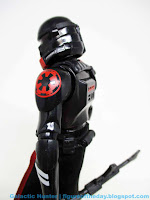 Commentary: I lucked in to the Purge Stormtrooper in early 2020 when taking a trip out for lunch on a random day off - it was just sitting on the pegs, with a slightly torn box.   It's a gem, and weird.   After Revenge of the Sith, we saw Hasbro take a bunch of wild swings at designing new Clone Troopers - and make no mistake about it, the armor of this figure is a clone.   This is the same armor used for the Phase I and Phase II figures you've been buying, but with a new head and a slightly different belt.  Oh, and the cloth kama.   The same blasters are back - mostly unpainted, except the rifle's other grip - and it's a goofy fun design.  This is the kind of thing you expect from a post-franchise product line - big Imperial logos on the shoulder pads, the Airborne clone helmet cast in black for the first time, and a mishmash of parts from other figures.  It's accurate, it's garish, and it's perfect.

The colors remind me a lot of the forgotten Utapau Shadow Troopers, which were exclusives with black armor and very pale tan, almost light grey, stripes on the armor.  Hasbro did those Shadow Troopers as 3 3/4-inch figures, but if they were the same scale as the Purge Trooper I bet they'd fit together nicely.  The red highlights really pop, and it's a lot like that TIE Pilot that GameStop had a few years ago.   You know the one. 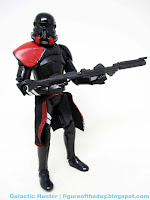 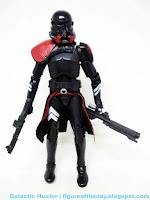 The glossy black helmet has striking red lenses and some silver trim.  Articulation is no different from the previous 6-inch Clones, with double-jointed elbows and knees joining bend-and-swivel wrists and a great mid-torso joint.  It's a wonderfully daffy design and I just love how garish those Empire cogs are on the shoulders.  The only thing I dislike about it, is that you don't have one if you want one.  It's fun, and I wish I had a horde of 3 3/4-inch ones to put in a Combat Tank or Troop Transport.   If you have a chance at one, at a fair price, get it.  It's not really worth the secondary market prices orbiting $100, but it is a joy to behold on my desk.  And I've never played the game, so maybe it's terrible, but the execution and overall shine work for me.

Collector's Notes: I got mine from GameStop on a surprise visit during lunch in early 2020.  Before the virus.   Even when I tried to get the figure with the game (with a friend, as I do not have a PS4 or Xbone) the figure was out of stock - I hope Hasbro makes more.