Star Wars Figure of the Day: Day 2,680: The Mandalorian (The Vintage Collection) 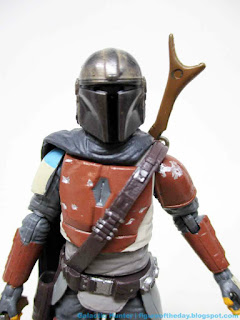 Bio: Din Djarin, commonly known as "the Mandalorian" or "Mando" for short, was a human male Mandalorian who worked as a bounty hunter during the New Republic Era. With his Mandalorian armor and distinctive beskar helmet, Djarin was both well-equipped and enigmatic—a stranger whose past was shrouded in mystery to others.  (Stolen from Wookieepedia. Packaging has no bio.) 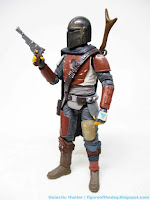 Commentary: Now that's more like it!   It's hard to easily see how far Hasbro has come with its 3 3/4-inch engineering over the years, as very few "new" figures are completely new tooling these days.  The Mandalorian is totally new, and you can see how much better he is than Hasbro's recent (now 10+ year old) Boba and Jango Fett figures are.  Is it perfect?  No - there's a little room for improvement, but when I say that it's minimal.  Hasbro did a good job here, but with some creativity I bet they could make it better on pretty much the same budget.

With no human head, and the least-detailed of the Mandalorian helmets, Hasbro may have a little room to play here.  The helmet is effectively one color with a t-visor, and I think they admirably replicated it as a grape-sized replica.   Deco is good for the size, with a smattering of damaged elements, painted ammo on his bandolier, but he's almost too clean. You can see sculpted dings and chips, but the color is largely uniform.  I'd love to see if - in some situations - it makes sense to do that "hyper-real face printing" on an element like the chest.  Why not print 2D battle damage over the armor to give it an action patina of some sort?  I'm nitpicking, of course, and the fingers are a bit more saturated in color than I would have expected - but it's great.  For $13 it's certainly worth the asking price in 2020. 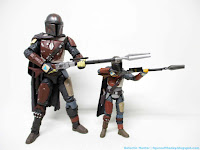 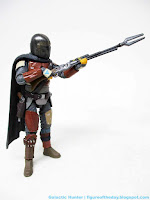 Articulation is as good as this scale gets from Hasbro.   The neck has a decent range of motion, and the body doesn't seem as hindered as previously released Boba Fetts.  Bobas Fett? Whatever, this is better.   Bend-and-swivel wrists are probably the most useful addition to his 28 points of articulation. 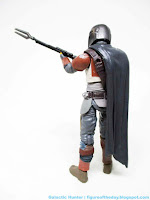 He has zero problems holding his painted blaster or nicely painted rifle, and they stow better in the 3 3/4-inch figure than the 6-inch one.  I'm even more surprised it's not the same sculpt chopped up at a smaller scale - the cape is clearly a different sculpt, and it appears other bits and pieces are slightly different too.  The blaster pistol easily slides in the holster, and the rifle fits in the slot in his back much more easily too.

Hasbro still has it when it comes to 3 3/4-inch figures - when they're inclined to make them.  I still see this as the "scale of record," even if Hasbro seemingly doesn't, and this is the kind of figure that would inspire fans to collect if a) they could find it, and b) if the line had more toys to buy.   I hope they build out a full toy line for the world of The Mandalorian beyond the title character and his little green friend.  I love that space western, and there's no shortage of weirdo characters, aliens, and Brian Posehns to enjoy.   If you can find him, get him - but don't be surprised if there are other versions later.  Battle-damaged?  Beskar Armor?   There are opportunities here, people.  Baby Yoda-sized opportunities.

One of the best figures they've made recently.

If only they released as many well articulated figures from the Mandalorian as they did for The Force Unleashed- which had a much smaller media impact.