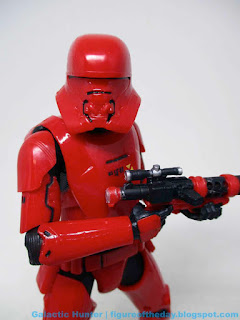 Bio: In its ultimate push toward galactic conquest, the First Order readies an army of elite soldiers that draw inspiration from a dark and ancient legacy.  (Taken from the figure's packaging.) 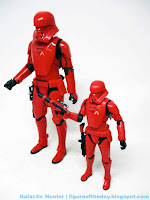 Commentary: I don't know if the Sith Jet Trooper is accurate or not.  How's that for an intro?   As I write this I haven't got the tech to zoom in film frames to check to see if Hasbro's decision to redecorate its white Jet Trooper in red is sufficient or not.   Guide books, Battlefront, and even the photo on the 3 3/4-inch The Vintage Collection figure match this 6-inch release.  However, the 3 3/4-inch figure itself, and the Pop! Funko figure, and a few others have these nifty grooves in the helmet, shins, thighs, and shoulders.  The 6-inch figure lacks these distinctive elements.  So one of the two is probably wrong - or maybe, there's a tiny chance that there's two versions in the movie and we haven't gone over enough behind-the-scenes material thanks to the secrecy behind these movies.   So maybe this figure is correct - and maybe it isn't.  If nothing else, it's true to Battlefront.

It's a nice figure but not as impressive as some other late 2019 and early 2020 releases.   It doesn't have the extra shoulder movement of the Sith Trooper, but it does have articulated jets on the jet pack as well as extra deco that the 3 3/4-inch figure is missing.   You still get double-jointed knees, rocking ankles, and excellent articulation allowing the figure to grip and aim the blaster easily.  The leg articulation is a bit more restricted, while there is movement it doesn't seem like it would be as good sitting in a vehicle, were a vehicle made for such a purpose. 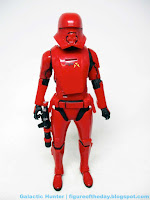 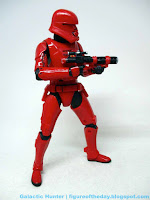 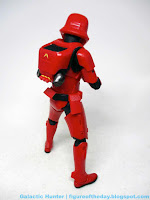 The figure has no problems standing or being posed in a number of action poses, and I'm impressed by how stable it is.   It's shiny and red, and it looks cool.   The blaster plugs in the thigh without a fuss, and I would say this is a worthwhile purchase if you can find it at a fair price.  It seems to match the portrait on the box, so let's say it's good enough until we find out otherwise.  As time goes on, our access to better stills, or the props themselves at a museum, we and Hasbro start to ask for better improvements on these figures.   For now, as far as I can tell, this is good enough.

Email ThisBlogThis!Share to TwitterShare to FacebookShare to Pinterest
Labels: Sith Eternal, The Black Series 6-Inch, The First Order, The First Order Stormtroopers, The Rise of Skywalker