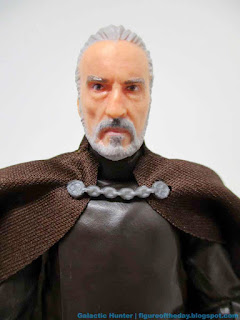 Bio: Count Dooku was a menacing Sith Lord and central figure in the Clone Wars.  Once a Jedi he became disillusioned with the Jedi Order and thirsted for greater power. (Taken from the figure's packaging.) 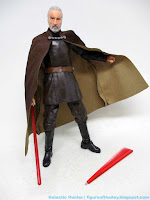 Commentary: I can only assume someone inside Hasbro is planing on reissuing last month's Count Dooku because it's just that good.   The last Sith character from the movies - but certainly not the final Sith costume variant - is one that doesn't have a lot you can do with it.  Other than adding Sith Lightning hands, this figure is pretty much the apex of Count Dooku-ness.  Maybe they can tweak the cape later, but it's pretty much perfect as it is.   I hope you have bought one or will buy it when you see it.

While it doesn't have a separately molded hair piece, the Christopher Lee likeness is excellent.   A portrait was printed over the sculpted face, showing what some of us have known for years - Hasbro does marvelous sculpts that can be marred by off-color skin tones or substandard paint apps. (See: a lot of Attack of the Clones Anakin figures in almost all scales 2002-2004.)   Thanks to the strength of Christopher Lee's face, and recognizable features, his figures turned out very nicely.  This one has a weird "doll" painted hairline on his skin, but aside from that it's as good as they come.  The eyebrows, the beard, the shiny eyes, it's the kind of thing that made you glad Hasbro waited seven years into this line to make him.   You never know when the golden age of a figure line may be, but it seems Hasbro has hit its stride right now - we're getting more interesting accessories, better articulation, and the best likenesses we've seen to date. 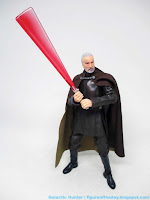 Articulation is as good as any figure these days, with decent elbows allowing for double-grip lightsaber duels.     We get swivel joints on the boots.  But you're more interested in the accessories.  The cloth cape has a light brown lining without being too thick, plus it has a sturdy plastic "chain" on his neck.  Aside from the unique stitching over his shoulders in the movies, it's perfect - but you can't have everything.  Cloth or plastic, a cape is going to have some compromises at this scale. 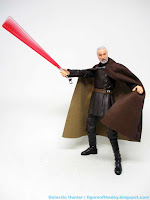 Most interesting, though, is the lightsaber.   Hasbro toyed with changing up the blade a bit in 2001 and the vast majority of the figures played it safe, with some flamboyant (and frankly, beautiful) exceptions in its 7-inch Unleashed line.   Hasbro gave us one of those standard red clear blades here, but you can pop it out of the curved hilt in exchange for a motion-blur blade.  Cast in clear plastic, elements of it are painted red to give it the illusion of movement away from its pure white core.  It doesn't perfectly sell the illusion, but the "swoosh" looks really cool. I bet figure photographers and diorama fans are going to buy extras of this figure just to pilfer the blade for customs.

Dooku's costume has been easy for Hasbro to do right since they seemingly have always had access to good reference, with the main variables being things like his face paint and the overall quality of the cape.  Hasbro did right on both here.   I'd call this an essential purchase, unless you're one of the weirdo fans who still won't touch a prequel figure even if it's good.  (Lookin' at you, Scott.)   Hasbro put in tons of joints and his most of them quite well, so go out of your way to get a Count Dooku.   And hope Hasbro keeps making them because you are going to want it later if you miss it now!

Email ThisBlogThis!Share to TwitterShare to FacebookShare to Pinterest
Labels: Attack of the Clones, Count Dooku, Revenge of the Sith, Separatists, Sith Lords, The Black Series 6-Inch